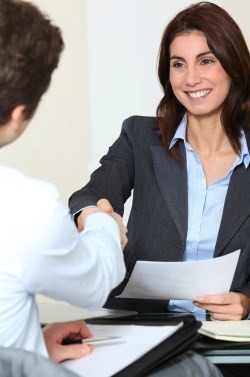 How many ping pong balls can you squeeze into a Boeing 747 airliner? It may seem like a difficult -- and perhaps oddball -- question, but for some job seekers, knowing how to answer it could lead to a career with one of the most competitive companies in the country.

Job profiling company Glassdoor has published its list of the 25 companies that give the toughest interviews. According to Forbes, Glassdoor dug through more than 80,000 interview ratings and reviews to find and rank the honorees. The results: 25 organizations that put potential candidates through the wringer at a time when widespread unemployment and a slow economy underscore the importance of acing any interview.

So which company earned its spot at the top of the list? The prestigious consulting firm McKinsey & Company. According to FINS, McKinsey is known for its unconventional interviews. In addition to asking candidates difficult, if not impossible questions, the firm also uses so-called "speed-dating" tactics where job hopefuls must meet with five executives, one at a time, for just one minute each. Such scenarios test job seekers' grace under pressure and underscore the importance of being able to make a great impression, fast.

FINS notes that McKinsey was not the only consulting firm to top Glassdoor's list: Boston Consulting Group, Oliver Syman, AT Kearny and ZS Associates rounded the top five spots on the list.

"Some of these interview processes take two to four weeks and include a phone screen, a specific company test before you even come into the office in some cases, interviews with multiple people, some present you with case studies that you're asked to analyze on the spot, and then others require a written test on top of that," Glassdoor Spokesman Scott Dobrosky told FINS.

High profile and ever popular tech firms such as Google, Facebook and Rackspace also made the list, not just for their difficult interview processes, but also because of how difficult it is to get the interview in the first place. According to FINS, many candidates reported being "discovered" by recruiters through conferences or professional networking sites such as LinkedIn. Other tech firms on the list include ThoughtWorks, Unisys, Juniper Networks and Amazon.

One might think that jumping through hoops to find or succeed in an interview with any of these organizations would leave job candidates bitter, but according to the Huffington Post, the opposite is true: job seekers at each company regarded their interviews as mostly positive.

"If an employer has a clear, well defined interview process that seeks to set expectations about what the job involves, as well as looks to get to know the candidate, where their interests lie and how they can help move the company forward, it's a natural correlation to see higher employee satisfaction rates given that candidates will have a clearer idea as to what the job entails and where the company is headed," Glassdoor Spokesperson Samantha Zupan told Forbes.

Glassdoor's 25 toughest companies with which to interview, as reported by Forbes:

"The Companies That Give The Toughest Job Interviews," forbes.com, July 26, 2012, Jacquelyn Smith