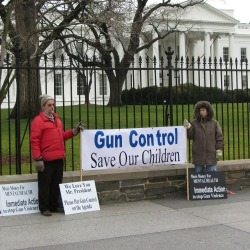 The December 2012 mass shooting that killed 26 people, including 20 children, at Sandy Hook Elementary School in Newtown, Connecticut, launched -- or reignited -- a long-simmering debate between gun control and gun rights advocacy groups about how to best protect students attending U.S. schools, including colleges. The Washington Post notes that the National Rifle Association recommends increasing the number of guns on campuses as an added security measure, while other groups want to limit the number of guns on school property. On Monday, U.S. Secretary of Education Arne Duncan and a coalition of mayors, college presidents and student representatives weighed in.

The Washington Post reports that Duncan appeared on Capitol Hill with leaders of Mayors Against Illegal Guns, the United States Student Association and College Presidents for Gun Safety to demand congressional action to curb gun violence. The press conference comes on the heels of an open letter published on the College Presidents for Gun Safety website urging lawmakers to oppose legislation allowing guns on school campuses. To date, the letter contains the signatures of at least 330 college presidents, some of whom participated in the event.

The Washington Post notes that the overall share of college presidents who signed the letter remains slightly less than 8 percent, perhaps in part because those heading public universities must answer to governors or legislatures and thus have less political leeway. When private institutions are included, that raises the number to just above 13 percent.

Ed Week reports that in addition to legislative action, Duncan and the coalition said they would like to see mental health addressed as a way to curb violence in schools, though they did not offer any specific recommendations. Duncan said that he had spoken to President Barack Obama on the matter as recently as the previous evening.

"If we refuse to act now, I don't know if we will ever act," Duncan said at the news conference, as reported by The Washington Times. "Sometimes the time picks you; sometimes you pick the time. The time has picked us."

"An Open Letter to Our Nation's Policy Letters," collegepresidentsforgunsafety.org, December 19, 2012