39 Percent of Workers Admit to Having an Office Romance 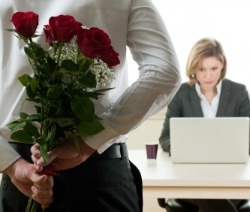 Barack and Michelle Obama. Bill and Melinda Gates. Brad Pitt and Angelina Jolie. What do all of these famous couples have in common? Each pair met on the job, reports Forbes. It's not just celebrity couples that are finding love at work, though. A survey released this week suggests that offices are a virtual hotbed of romantic activity.

According to a new survey published via press release by the job website CareerBuilder, many Americans date -- and even marry -- their work colleagues, despite the fact that office romances may seem a bit taboo. Of the 4,216 workers who participated in the survey, 39 percent admitted to having a relationship with a co-worker over the course of their careers, and 17 percent reported doing so at least twice. Many of these relationships have staying power, too: Of those respondents who say they have dated a co-worker, 30 percent eventually married their office flames.

The CareerBuilder survey, which was conducted online in November by Harris Interactive , identified a number of additional trends relating to office romance. For example, 29 percent of those who have had office romances have dated someone above them in the company hierarchy, with 16 percent saying they dated their boss. CareerBuilder also found that most respondents who engaged in office relationships -- regardless of rank -- were open about their dating situation. Overall, just 35 percent said they kept their relationship a secret.

CareerBuilder also investigated where office romances typically begin. According to the survey, the majority of office relationships begin at social functions outside of the workplace, though 12 percent of respondents cite late nights at the office as the catalyst. Also, most of these relationships occur between co-workers in different roles: Only 20 percent of respondents said they dated someone with a similar position.

The likelihood of finding love in the workplace may depend on your line of work. According to the CareerBuilder results, the prevalence of workplace romance exceeded the average in five industries: leisure and hospitality, information technology, finance, health care, and personal and business services.

According to the Boston Globe, CareerBuilder offers up a number of theories as to why office relationships are so common. One possible explanation is that many people consider a potential partner's occupation before deciding whether to date them, so those working within the same industry might have an edge. Another theory posits that because people are spending more time in the office, they have less time to date or meet new people elsewhere.

While some may be surprised by the high volume of office romances suggested by the CareerBuilder survey, Forbes reports that the number may actually be much higher. According to Forbes, competing website Vault.com conducted a similar office survey for several years before retiring it in 2011. According to its final results, a solid 59 percent of workers said they had dated a work colleague.

"When it comes to romance, April in Paris may take second place to the office, survey suggests," boston.com, February 13, 2013, Chris Reidy