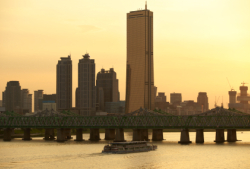 The president of South Korea's top science and technology university is fighting to save his job after a string of student suicides sparked criticism of his educational reforms.

According to The Chronicle of Higher Education, president Nam Pyo Suh has been under fire for his tough new policies at the Korea Advanced Institute of Science and Technology (KAIST), one of which reprimands students with poor academic grades.

Before Suh came on as president, the university offered free tuition to all its students who passed its rigorous entrance requirements. However, in an attempt to increase academic excellence, Suh enforced a policy in which students who earned a GPA below 3.0 must pay partial tuition and anyone with a GPA below 2.0 must pay full tuition, which is roughly $5,540.

As The Wall Street Journal reported, KAIST is one of the most academically-challenging and prestigious universities in South Korea. Suh had intended to emulate the same standards that are used in the U.S. and many other countries, where students must maintain a good GPA in order to keep a scholarship. However, in South Korea, a country of great competitiveness, poor performance is a stigma no student wants.

Channelnewsasia.com, reported that since January four KAIST students and one professor have committed suicide. The first incident was a 19-year-old robot genius who complained of extreme stress. While the Chronicle of Higher Education noted that the professor's death is likely to be unrelated, the deaths of the four students have led many to believe that Suh's reforms are indeed too much.

"I don't think the policy was good because from the students' point of view, it gave them a lot of stress," said one professor to The Chronicle of Higher Education. "It creates even more competition after a very competitive high-school exam system."

One of South Korea's most influential civic groups has called for Suh to be fired; however, when KAIST's board met to discuss the problem, Suh's resignation did not come up. Instead, the board chairman, Oh Myung, told the Korean news media that they would discuss "how to prevent further suicides on campus".