40% of U.S. Workers Do Not Expect a Pay Raise This Year 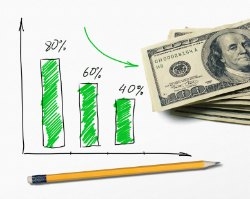 A few months ago, Ford Motor Co. announced that it would grant about 20,000 workers a 2.7 percent raise, their first in two years. While last decade's workers may have scoffed at the small amount, a new survey reveals that many of today's U.S. workers would consider it generous.

According to Business News Daily, a new NorthgateArinso survey found that nearly 40 percent of U.S. workers do not expect to receive a raise this year, at least not one that tops the national inflation rate. While this number may serve as a barometer for a growing national pessimism regarding pay, it is actually lower than the global average of 45 percent who say they did not expect a meaningful raise. The least hopeful workers reside in the United Kingdom where a notable 70 percent of respondents reported they did not anticipate a pay raise at all this year.

The Christian Science Monitor reports that while raises are getting smaller, consumer prices continue to rise, a trend that could eventually stall consumer growth. What's more, this news comes in spite of rising corporate profits. In fact, notes the Monitor, many new employees are earning less than they would have five years ago, and even long-standing workers who have survived layoffs have limited bargaining power when it comes to wages or benefits.

"It's a buyer's mar­ket for employers," Linda Bar­rington, managing director of Cornell University's Institute for Compensa­tion Studies in New York, told the Monitor. And the future does not appear to be much brighter.

"With the unemployment rate declining slowly, if at all, there are still a lot of job seekers, and employers will still have the upper hand in wage determination," explained Gad Levanon, macroeconomic research director at the Conference Board in New York, in the Monitor. "So I expect very low wage growth even through 2013."

According to a press release, many workers blame employers for sluggish pay growth as much as the economy: 69 percent of global respondents and 73 percent of U.S. respondents said they believe their companies could have adapted to the economic downturn by increasing non-monetary benefits like flexible work options.

"Business leaders should be asking about other ways to make sure that their talent feels valued," said Brad Everett, NorthgateArinso vice president of strategy, marketing and portfolio management, in the press release. "After pay, relatively low-cost initiatives such as flexible working and wellness programs, like on-site trainers, are hugely prized by employees and these are changes that companies can easily make to show how they value workers."

"Not All Workers Optimistic About Getting a Raise This Year," businessnewsdaily.com, July 9, 2012, David Mielach

Career and Education News
Home >
News>
40% of U.S. Workers Do Not Expect a Pay Raise This Year