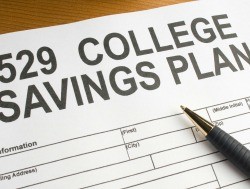 States around the country yesterday participated in National 529 College Savings Day -- a day intended to promote and encourage people to invest in 529 savings plans.

529 plans, as The New York Times explained, are state-sponsored college savings and investment accounts. Investments grow tax-free, as long as the money withdrawn is used for educational objectives. While an individual does not have to live in the state sponsoring his or her plan, some states do provide additional tax breaks to residents.

Every year on May 29, states hold special promotion events to encourage individuals to take advantage of the 529 savings option. This year, over 30 states held events and provided incentives for families to open accounts. Utah, for example, offered a $25 matching contribution for each account with an investment of at least $25 opened on that day. Florida plans to waive the $50 enrollment fee for accounts created between May 20 and June 30. The state of Virginia, as featured in PR Web, held a contest for babies born on May 29. The 20 who arrived the closest to 5:29 p.m. at participating hospitals were to receive a $529 investment in a 529 plan. Virginia529 CEO Mary G. Morris stated that the goal of the contest was to "help families find ways to make college more affordable and accessible."

As Morris explained, many parents experience a struggle when it comes to saving for their children's education: "According to a recent survey, 88 percent of parents believe it is important for their children's future to attend college. Yet, most are not regularly saving for higher education costs. There's a disconnect between the value of education and the reality of covering the costs."

While 529 plans can be a beneficial avenue for college savings, KWQC News revealed some aspects of the plan that savers should consider before investing. Saving in a 529 account, for example, reduces how much financial aid a student is eligible to receive. The degree of reduction depends on who the owner of the plan is. A plan in a parent's name results in the least amount of reduction in potential financial aid awards (5.64 percent), whereas a plan in the student's name could result in a 20 percent reduction, and putting a plan in a grandparent's name could cause a 50 percent reduction. Douglas Wier, manager of Bettendorf Financial Group, mentioned that although the 529 plan is indeed a "great investment vehicle," recent law changes have led to its negative impact on financial aid.

KWQC News advised savers to be aware of the financial consequences of 529 investments when states promote them. Brandon Lobberecht, a graduate of Drake University, expressed his opinion on states publicizing the college investment vehicle: "I think they're trying to get ahead of the game and get people to put money into actual plans to knock off the amount of loans they're going to have in the future."

Since 529 regulations differ by state, KWQC News recommended consulting a financial advisor or a state's plan manager before deciding on an investment strategy.