70 Percent of U.S. Employees are Disengaged at Work 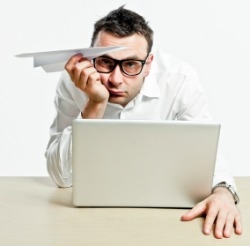 Are you excited to come in to the office and start your day? If your answer is no, you are not alone.

Gallup's annual State of the American Workplace report showed that 30 percent of American workers feel excited about their jobs, reported The Wall Street Journal. According to Gallup Business Journal, though the figure sounds low, it actually matches the highest level of engagement since Gallup began tracking engagement rates among U.S. employees in 2000. Still, businesses should not be quick to celebrate as this still means that a whopping 70 percent of workers do not care about work. Specifically, 52 percent reported they did not feel involved, enthusiastic about or committed to their jobs. On top of that, 18 percent reported being "actively disengaged," meaning they are emotionally disconnected from their workplace and, therefore, are likely to be less productive at the office.

While things such as management, day-to-day responsibilities and a company's mission or culture can play a role in worker engagement, The Wall Street Journal noted that factors such as gender, location and job title can also have an effect. For instance, women and managers tend to have higher levels of engagement. Likewise, new hires in Louisiana also tend to have record levels of engagement. The Gallup Blog highlighted that workers who are at the beginning or near the end of their careers also tend to be more engaged than those who are in the middle of their careers. The most important factor and predictor of workplace engagement, however, is company and team size, reported The Wall Street Journal. Employees at companies with 10 or fewer workers as well as employees on teams of five to nine people reported a higher engagement rate than employees in larger groups. Gallup speculated that this could be due to the fact that managers of smaller groups can connect with employees individually and on a more personal level, which can be highly motivating.

It is important for business leaders to pay close attention to employee engagement because unhappy, disengaged workers can cost companies billions. According to The Gallup Blog, U.S. companies lose $450 to $550 billion every year in lost productivity. Furthermore, disengaged workers are more likely to steal, miss workdays, negatively influence colleagues and drive customers away.

"The general consciousness about the importance of employee engagement seems to have increased in the past decade," said Jim Harter, Ph.D., Gallup's Chief Scientist of Workplace Management and Wellbeing, in Gallup Business Journal. "But there is a gap between knowing about engagement and doing something about it in most American workplaces."

In order to boost employee engagement, Gallup recommended businesses and managers take a more personal approach by listening to and addressing employee feedback, thoughtfully selecting team leaders who are capable of supporting and empowering a team, holding managers accountable for subordinates' engagement, making attainable and realistic engagement goals, and discussing these goals with employees during meetings or one-on-one sessions.

"Gallup Releases New Findings on the State of the American Workplace," thegallupblog.gallup.com, June 11, 2013