Study Reveals That 80% of U.S. Workers Are Stressed 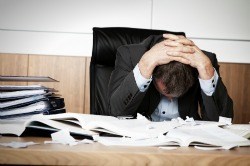 If you are stressed out at work, you are in good company: A new survey suggested as many as 80 percent of Americans are dealing with job-related stress, though causes vary. Forbes cautioned that workplace stress can hinder productivity and hurt your image, so it pays to recognize its causes and minimize them.

A new Nielsen survey conducted on behalf of Everest College found that 80 percent of American workers are stressed out by at least one thing at work, reported CNBC. This marks a slight improvement over last year, in which 83 percent of respondents reported feeling stressed, but remains high despite healthier jobs reports and consumer confidence data.

"I think a lot of it has to do with what's happening in the workforce today: People in the U.S. think we're still in a recession," Wendy Cullen, vice president of employer development for Everest College, told CNBC.

Though most workers reported feeling stressed, Blue Sky Innovation noted that their stressors vary. According to the survey, long commutes and low pay topped the list for most prevalent stressors, each earning 13 percent of the vote when participants were asked to identify the source. Unreasonable workload came in second, followed by annoying coworkers and poor work-life balance.

A positive note, reported CNBC, is the fact that fear of job loss ranked near the bottom of the list, suggesting that though the job market is improving on paper, workers on the ground are feeling the crunch in new ways. They may find that many downsized positions have not been replaced, which spells higher workloads. Raises still continue to be sparse, too.

Workplace stress may be common, but that does not necessarily mean one should dismiss it as par for the course. It can have very real consequences, and not just in terms of personal health. Forbes reported that the United Nation's International Labor Organization has defined occupational stress as a global epidemic -- one that can impede success and paralyze productivity. It may also impact professional relationships, triggering what stress management expert Jordan Friedman called "second-hand stress."

"Second-hand stress impacts you and those around you and it's hazardous to your brand," Friedman told Forbes. "Stress shuts down two-way communication, hinders problem solving and sends an 'I'm more important than you' message."

Fortunately, stress can often be managed. According to Forbes, meditation can help some workers reduce their stress, as can classes on health and general well-being. Workers can also give stress-reduction apps such as TheStressCoach.com's Stressbusters a try.