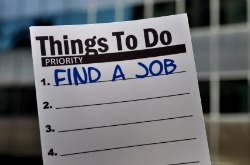 A clear indication of widespread employee dissatisfaction in the workplace, 84 percent of workers said they are looking to leave their old jobs for new ones entering the New Year.

According to CNN Money, a survey released by Manpower, a job-placement firm, found that a staggering 84 percent of employees plan to look for a new position in 2011. This figure represents a dramatic uptick from 60 percent last year.

Most workers have weathered the recession by holding onto their jobs for financial security. For the past few years, the Labor Department has reported an all-time low quit rate, which is a measure of worker turnover.

However, heavier workloads and stagnant salaries have led workers to look beyond their current jobs for brighter prospects.

Gilad Chen, a professor of management and organization at the Robert H. Smith School of Business at the University of Maryland, conducted a study investigating job satisfaction among groups of workers, The Washington Post reported. He found that regardless of age, length of employment at an organization or absolute level of satisfaction, the single most important factor determining whether a worker planned to stay or leave was if the individual's satisfaction was rising or declining. According to Chen, employees who experience declining job satisfaction expect to become even less satisfied with their jobs in the future and then decide to leave.

According to Matthews, employees are unhappy because of the recession, job-market weakness and disruptive workforce changes. He added, "Employees' trust has been seriously shaken and there is a general lack of confidence in leaders."

If corporate managers wish to alleviate employee dissatisfaction, Matthews suggested that they recognize employees who perform well and provide them with constructive feedback.

The survey, the workplace equivalent of an opinion poll, also found that only 5 percent of workers want to stay at their current positions. Matthews predicts that if corporate leaders fail to make a significant change in the workplace, employees will leave for better opportunities.

"Clearly, if the job market picks up a lot next year many employees are going to take advantage of it, and organizations stand to lose some of their top contributors," Mathews said.