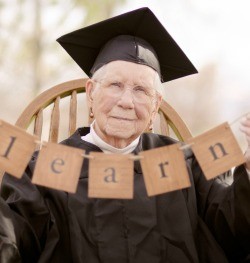 If you think you're too old to go back to school, Wally Taibleson might change your mind. He's a 90-year-old Southern Californian who, on Friday, received his fourth college degree, a Master of Arts in education, from Cal State University, San Marcos, KTLA News reported. The oldest graduate in the California State University system, Taibleson also holds a bachelor's degree in history, a master's degree in history and a master's degree in literature and writing studies.

"Any time you can devote to improving your mind and increasing your learning, it's valuable for you as well as those you're associated with," Taibleson said.

"He is an inspiration to all of our students and a positive reminder that it's never too late to follow your dreams," she added. "You can be impacted by knowledge, even well into your 90s."

Taibleson first started college at age 70 in 1993 to stay busy and sharp following retirement. As stated in ABC News, after Taibleson retired, his son, Jim Taibleson, suggested he tackle the one pursuit he hadn't -- attend college. "There's only so much time you can spend tending to your roses," said Jim Taibleson.

Previously, Wally Taibleson had married to his sweetheart, Clare, had raised four children and had worked as a certified public accountant and, later on, as a chief financial officer and vice chairman of the board for Chicago's National Can Corp.

"He's insatiable and curious and a true example of a lifelong learner," Jim Taibleson mentioned to NBC San Diego. "He's the embodiment of what people should be doing when they're curious and want to keep acquiring more knowledge."

According to ABC News, Wally Taibleson almost quit his educational pursuits about 12 years ago when his wife passed away, but sticking with it gave him purpose.

He likely won't earn any further degrees, as his deteriorating eyesight due to macular degeneration makes it difficult to read. He wears glasses and often a magnifying headpiece, and, at times, he uses a magnifying glass. Though challenging, he forces himself to read, he said.

"Now, we're just trying to figure out what kind of adventure is next for him," Jim Taibleson told NBC News.

Wally explained to ABC News that he still plans to continue learning and give back. "I don't want to sound foolish, you know, save the world," he said, "but at least you like to make some kind of impression."