A Bad Job Can Wreak Havoc On Your Mental Health, Studies Show 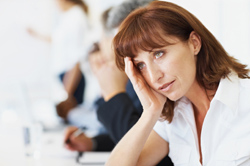 Having a job is better than being unemployed. Or so that's what we've been telling ourselves as we read about the fickle job market. However, a new study in Occupational & Environmental Medicine has just proved us wrong.

The Wall Street Journal reported that researchers from the Australian National University analyzed data from 7,155 adults to determine the link between mental health and job quality. Data showed that those who were unemployed had comparable or superior mental health scores to those who had poor-quality jobs, which were defined as jobs that are demanding, yet low-paying and lack autonomy and security.

Furthermore, the study noted that of those who were unemployed, the people who later found high-quality jobs exhibited significant improvements in mental health, while those who took poor-quality jobs showed a decline in mental well-being relative to remaining unemployed.

According to the study, researchers concluded that having a poor-quality job does not provide the same mental health benefits as having a job that is high-quality, which "suggests that psychological job quality is a pivotal factor that needs to be considered in the design and delivery of employment and welfare policy."

A Gallup study found similar results. Forty-two percent of actively disengaged workers--defined as workers who are emotionally disconnected from their work and workplace--said they were thriving in their lives, whereas 48 percent of unemployed respondents rated their lives as thriving. Of American workers who were engaged--defined as being involved in and enthusiastic about their work--71 percent said they were thriving. Gallup speculated that worker engagement and disengagement are "significantly influenced by how employees are managed".

Furthermore, when surveyed about their well-being, actively disengaged workers reported being less likely than their unemployed counterparts to feel well-rested, treated with respect, smile or laugh a lot, learn something interesting, or experience enjoyment the day before the survey.

As The Wall Street Journal pointed out, some workplaces have been so unbearable post-recession that one career consultant in Minnesota advised clients to quit, even without another job lined up, as being in a toxic environment simply isn't worth it. Fox Business, on the other hand, noted that sometimes a bad job is necessary and that having things like employment benefits and steady income far outweigh the suffering that comes with unemployment, especially if you have a family.

That being said, Fox Business recommends that those struggling with a bad job should focus on the positive things and change their outlook. Also, unhappy workers should keep in mind that keeping a bad job is just something one has to do until something better comes along. As Rafe Gomez, a business strategy and marketing communications consultant, put it, "By shifting your bad job's timeframe from 'forever' to 'for now' you'll relieve some of your mental anguish, gain a sense of control over the temporarily unpleasant situation, and give you a goal: to land a new job that you love."