A Call to End College Essays: Constructive Move or Cop-Out? 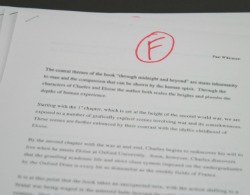 Essays are not just for English and history majors: many college courses require them, and across a wide breadth of disciplines. One professor thinks they are largely an exercise in futility -- not really teaching most students much of anything. Her proposal? Do away with them and bring old-fashioned oral exams back from the brink of extinction. Not all experts are on board.

In a column she wrote for Slate Magazine, Rebecca Schuman, an adjunct professor at the University of Missouri in St. Louis, argues that in era marked by plagiarism, essay-writing services and machine grading, the quality college essay is somewhat of a lost art. Students hate writing them, she writes, but not quite as much as college professors hate grading them. She argues that most seem to be thrown together at 4 a.m., and instructor comments meant to improve them are often ignored. The solution? Do away with them, or at least most of them. English majors still need -- and want -- to write, she notes, but students in other disciplines do not.

"We don't have to assign papers, and we should stop," writes Schuman. "We need to admit that the required-course college essay is a failure."

Schuman proposes that in place of college essays, professors should give old-fashioned oral and written exams that require students to really know the material, but demand less time and grading. Such exams could promote learning while staving off criticism that the humanities are too soft or subjective, she argues, adding that in today's economy, a bachelor's degree is "the new high-school diploma: abjectly necessary for any decent job in the cosmos." As such, students and their parents see college as a means professional training, and view writing assignments as "forced labor" and "an utter waste of time."

Ron Culp, instructor and professional director of public relations and advertising at DePaul University, agrees -- to an extent. He told CityTownInfo that in his classes, he has done away with essay writing in favor of "more practical" assignments, like business memos in which students must convey ideas in tightly-written, one- or two-page papers.

"Besides being more relevant to what most (students) will be expected to do in the real world, business memos save considerable grading time and frustration on my part," said Culp, noting that some students have even begun requesting more of these assignments. "They realized better and tighter writing can become a job-search differentiator, beginning with the cover letters for their resumes."

Glenn Mores, president and CEO of MicroData and former senior lecturer at Northeastern University, told CityTownInfo that he "100 percent concurs" with Schuman's proposal to rachet up written and oral exams, but not at the expense of essays.

"(Giving) up on essays seems more of a surrender than an admission that the skills learned aren't important," said Mores. "Writing skills are important for any employee to do more than the most basic work tasks, the very occasional Mr. Zuckerberg aside. Anyone that can't communicate in writing and orally isn't going far."

Alfred Poor, PhD., speaker and author of "7 Success Secrets That Every College Student Should Know," may be inclined to agree. He told CityTownInfo that study after study suggests hiring managers find college students to be generally unprepared for the job market, and that a "broad lack" of verbal and written communication skills top their list of complaints. Simply letting students graduate without these skills will not solve that, he said.

"Instead of moaning about how difficult their job is, college professors need to be held accountable for giving their students the skills… that they will need to succeed upon graduation," said Poor, noting that "the consequences of failure in college are far more benign" than they are in the workplace. "We do them no favors by taking tuition and four years of their time and then just handing them their degree."