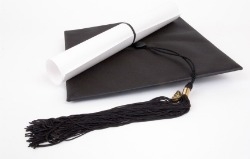 An internal audit published last week revealed that Dickinson State University in North Dakota has awarded invalid degrees to more than 500 foreign students since 2003. In fact, of the 584 degrees awarded, only 10 were obtained properly -- the rest were given under "false pretenses," according to the report.

Director of University Relations Marie Moe told The New York Times that the school's president, D.C. Coston, ordered the audit after reports that the program lacked the proper oversight.

"The procedures that are in place were not properly implemented," she said.

Coston said no immediate disciplinary action is planned for the employees linked to the scandal. The programs in question are the Dual-Degree Joint, Top Up and Disney, which requires students to study for seven months at the Walt Disney World Resort in Orlando and six at Dickinson State. According to the audit, violations included students not earning the proper number of credits, not meeting admissions requirements, or submitting falsified transcripts or applications.

Most of the impacted students were from China, but some were Russian. The report revealed that many students were lured to Dickinson by recruiters who posed as employees and misrepresented program requirements and flexibility. According to Bloomberg Businessweek, these recruiters received commission from the University as well as fees from the students' families. The school, in turn, earned more in tuition: students from China pay $12,978 per year in tuition and fees at Dickinson, more than double the $5,608 paid by state residents.

These practices have fueled a fiery debate about the potential exploitation of Chinese students by U.S. colleges, which is a growing phenomenon. Bloomberg Businessweek reported that about 57,000 Chinese undergraduates attended American colleges in 2010-2011, six times as many as in 2005-2006.

Adding to the Dickinson scandal is the news that Dickinson's dean, Doug LaPlante, was found dead from an apparent self-inflicted gunshot. The campus was on lockdown earlier that day when LaPlante was reported missing with a shotgun.

Dickinson's audit and news of LaPlante's death came on the heels of another report released last week revealing potential human resource violations at the school. According to the Grand Forks Herald, issues highlighted in the document included missing or incomplete performance evaluations and multiple sexual harassment claims.

It is unclear whether LaPlante's suicide is linked to the HR report or the degree audit.

Coston emphasized during a press conference on Friday that Dickinson continues to rely on community and alumni support during this difficult time.

"We will work tirelessly to be the Dickinson State you revere and cherish," he said. "We are asking (all) to come together as a family and that we all pull together."

"Degrees (Without the Work) for Foreign Students at a North Dakota University," thechoice.blogs.nytimes.com, February 10, 2012, Lily Altavena and Daniel Slotnik