About 50 Percent of College Students are First Generation, and Face Unique Challenges 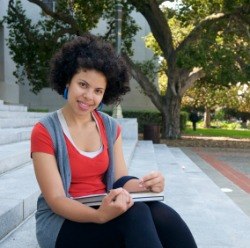 Once upon a time, college attendance seemed more a privilege than a necessity. According to Diverse Issues in Higher Education, that has changed. Economically speaking, America needs more college graduates than ever, which means it must bring more students into the college fold, including those whose families have never attended. First generation college student numbers are higher than ever, accounting for an estimated 50 percent of the college student population in 2010. Programs designed to support the first-time grads have contributed to the trend, but that does not mean these students are without challenges.

Diverse Issues in Higher Education attributes the recent influx of first-generation college students to a number of factors, like the availability of online courses and the affordability of community colleges, which typically serve as stepping stones to higher degrees. Schools and non-profit organizations are investing more into these students, too. One such program is the American College Application Campaign, which aims to motivate and support first-generation students through the first barrier they encounter in their road to higher education: the application process. According to The Pew Charitable Trusts, students whose parents have not navigated the application process feel like they are at a disadvantage. They are not always aware that application fees can be waived for low-income students, and can be flustered by the unfamiliarity of the application process. The ACAC works with schools to counsel students through this process, and so far it seems a success. Last year the ACAC encouraged 130,000 students across 24 states to submit more than 195,000 college applications. This year a full 39 states are already participating in the program.

The application process is only the first of many challenges facing first-generation college students. According to Pew, research suggests that one's parents' educational attainment is the greatest predictor of one's college success, and first-time college students are four times more likely to drop out of college than students whose parents have a degree. That statistic might improve among those whose parents support their educational endeavors, however. First generation college graduate, author and entrepreneur Simon Tam told CityTownInfo that he was inspired -- not hindered -- by his parents' struggles.

"Since a very young age, my parents instilled the dream of graduating college," said Tam, the child of Chinese and Taiwanese immigrants who could not afford to go to college with a family to feed. "To them, it was the idealized American dream… Part of graduating was honoring their hard work and sacrifices they made for me to have the best chance possible."

First-generation college graduate Lisa Nelson, a small business owner who graduated from both Smith College and Brown University, was also inspired by her parents' struggles. She said African American families like hers were generally not encouraged to attend college, and her mother in particular was made to feel academically inadequate.

"This was a case where they didn't know how to teach her, so they told her she wasn't smart enough," Nelson told CityTownInfo. "Of course that wasn't true. I think it was just another form of discrimination." Nelson said that adversity actually motivated her mom to push her own children to succeed. She enrolled Nelson in math and science programs designed to serve minority students and took out loans for her daughter's education. "She was relentless," said Nelson, who credits her success to "her -- nobody else."

Another challenge for first-generation students: Money. Tam said he would encourage prospective students to contact their guidance counselors and area colleges to inquire about scholarships and other aid, but sometimes that is not sufficient, and students have to find a way to finance their own educations. Journalist and author Vanessa Runs, the daughter of illegal immigrants who fled to Canada during the civil war in El Salvador in the early 80s, said that even with several scholarships, she had to work full time and even take time off school to cover her tuition costs.

"Often, I faced the choice of paying for school and textbooks, or paying for food," Runs told CityTownInfo, noting that she often relied on charities for her meals. "Still, all my sacrifices paled in comparison to what my parents had sacrificed to get me here," she said.

Sometimes, however, even first-generation college students with family and financial support will face challenges. Abiezer Cristales, a first generation college graduate who now serves as assistant principal at the Texas-based Sam Houston Middle School, advises these students to find their own motivation to attend school, to believe in themselves and, most of all, to be persistent.