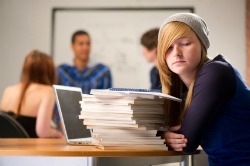 College slackers are more apt to struggle in post-graduation life than their studious peers, a new study shows.

"Documenting Uncertain Times: Post-graduate Transition of the Academically Adrift Cohort" is a follow-up to the survey described in the book, "Academically Adrift: Limited Learning on College Campuses," which was released last year. The prior study showed students' analytical reasoning, writing skills and critical thinking didn't improve in college because many of them weren't required to spend much time studying, The Chronicle of Higher Education reported.

The researchers of the new study found the results so significant, they decided to release them ahead of schedule. Those behind the study are the "Academically Adrift" authors -- Josipa Roksa, assistant professor of sociology at the University of Virginia, and Richard Arum, professor of sociology and education at New York University -- along with Esther Cho, program coordinator at the Social Science Research Council, and Jeannie Kim, a doctoral candidate in sociology at NYU.

From their original group of college students, the researchers separated out those who scored in the lowest and highest quintiles on the Collegiate Learning Assessment while in school. This test measures skills and competencies that "matter for many important early-adult, life-course outcomes" and "successful adult transitions," according to GOOD. It was these students, now graduates, who the researchers used for the new study, comparing their academic strengths to their post-graduate success, and to each other.

Among other findings, business majors found full-time employment more frequently than students with any other major. More than 71 percent of business majors were working, followed by communications majors at nearly 68 percent. Only about one-third of science and math majors had jobs, but almost half of the graduates in these fields were enrolled full time in graduate school, the most of any major, The Chronicle of Higher Education noted.

The study results highlight the importance of college students to be academically engaged, thinking critically and participating civically while in school.

"The associations found between educational experiences and life-course outcomes (such as employment, financial status and civic engagement) further reinforce an appreciation of the importance of college academic achievement and performance," the authors wrote in the report, according to The Cavalier Daily.

"How Poor Performance in College Sets Students Up for a Lifetime of Difficulty," good.is, January 26, 2012, Liz Dwyer