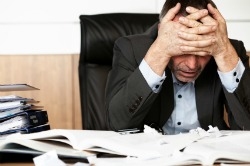 If you hate your job but are sucking it up for the long haul, you're in good company. In fact, your boss is likely in the same boat.

According to a press release, a new global survey conducted by consulting firm Accenture reveals that nearly 60 percent of workers are dissatisfied with their jobs, yet more than two-thirds of respondents say they do not plan to seek other positions. Furthermore, the discontent knows no rank either: as reported by Life Inc. 42 percent of top executives said they were satisfied with their jobs; however, only 24 percent were looking for other opportunities.

The study, titled "The Path Forward," was based on survey responses of 3,900 business executives from organizations in 31 countries.

According to Life Inc., big bosses shared many of the same complaints as their subordinates, namely dissatisfaction with their salaries, long hours and heavy workload. Seven of 10 higher ups also reported that their career demands have a negative impact on their home lives. Another major complaint among workers was limited advancement potential. The Vancouver Sun reported that when asked why their career trajectory might have stalled, respondents blamed the economic down-turn as the root cause while 40 percent blamed parenthood.

The survey also indicates that whatever gender gaps remain in the workplace, men and women are on the same page when it comes to disliking their jobs: 59 percent of men said they were unhappy, just slightly more than the 57 percent of women who said the same.

But while men, women, bosses and worker bees are all dissatisfied in the workplace, most plan to stick it out rather than seek new work elsewhere; perhaps surprisingly, a crummy job market is not their primary reason. According to Business News Daily, the driving force behind staying put is flexibility in the work place. Most respondents reported having some type of flexible work schedule, and 44 percent say they have had flexible work options for more than three years.

While workers may not see much room for immediate job growth or have plans to find new work right now, that does not mean they are not investing in their careers. According to The Vancouver Sun, 58 percent of respondents said they had accepted a new role or responsibility while 46 percent said they were pursuing more education or training.

"Despite current challenges, employees are still striving for success--and energized, engaged employees remain a competitive advantage," said Adrian Lajtha, Accenture's chief leadership officer. "Since the majority of today's professionals are not job hunting, leading companies must capitalize on this moment in time to equip their people with clearly defined career paths that include innovative training, leadership development and opportunities for advancement."