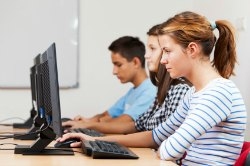 ACT, the Iowa-based nonprofit testing company, announced yesterday that it will be creating college and career readiness assessment tests to be administered to students in grades 3 through 10.

"It connects all the grades -- elementary school through high school -- to measure growth and development," explained Jon Erickson, ACT's president of education, who was quoted by Education Week. "It informs teaching, as students progress, to intervene at early ages."

The tests will cover the four areas now included on the ACT: English, reading, math, and science. The tests, which are expected to be piloted in states this fall and officially launched in 2014, will be delivered digitally and students will have automatic scoring and real-time assessments.

Erickson explained that the goal of the tests is to identify and address gaps between what students learn in school and what they need to learn to be successful in college. "It is designed to have measures that help the teachers daily, weekly in the classroom," he was quoted as saying by the Los Angeles Times. "It will help identify what students needs are as they're progressing toward college."

Terry Holliday, Kentucky's education commissioner, told The Courier-Journal that he is "excited about the potential of this new assessment," particularly because the state is focusing on college and career readiness. "The thing we are interested in learning more about is how to measure certain types of workforce readiness skills -- things like problem solving, teamwork -- things that are often difficult to measure via standardized testing," he said.

But others were concerned about the ramifications of such assessments. "On any given day, my daughter wants to be one of the following: a veterinarian, an artist, a nanny, a princess, a writer, a dancer and the president of the United States," said Myrdin Thompson, a mother of three who was interviewed by The Courier-Journal. "If a test says that she should be a scientist, her teachers might be persuaded to discourage her from her love of drawing and dance.

"I believe our educators and schools, in partnership with families, can create the proper environment in which all students will discover their potential, and they don't need an assessment test to tell them how to do it," she said.

But Holliday countered that college and career readiness should be tracked at an early age, particularly in Kentucky: According to recent data, just 38 percent of the state's 41,784 high school students who graduated in 2011 were considered adequately prepared for college or careers.