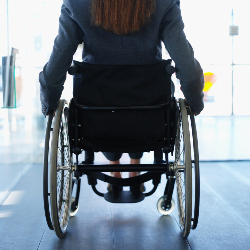 Monday, July 26 was the 20th anniversary of the Americans with Disabilities Act (ADA), reported The Christian Science Monitor. The act, which was signed by President George H.W. Bush in 1990, is a civil rights law that forbids discrimination against individuals with disabilities. "The ADA mandates have broken down architectural, transportation and communication barriers," said James Weisman, senior vice president and general counsel for the United Spinal Association.

However, while the act has been transformational for tens of millions of Americans in the last two decades, The Christian Science Monitor pointed out that there is still a lot more that needs to be done. According to Robin Bond of Transition Strategies, LLC, an employment law firm, discrimination now happens in sneakier ways. "Employers realize that with the law, they can't be overt about simply firing someone, so they figure out ways of restructuring and reconfiguring their organizations to get rid of these people in a less blatant way," explained Bond.

According to a press release from the Kessler Foundation and the National Organization on Disability (NOD), many Americans with disabilities "are still struggling with many of the same lifestyle and economic issues they confronted in 1990 when the ADA became federal law".

Jennifer, who has rheumatoid arthritis, told MSNBC that she always hides any evidence of her arthritis when interviewing. "I know hiring managers aren't supposed to discriminate, but they often subconsciously do. It's human nature," she said.

The Kessler Foundation and NOD found that there is still a substantial gap in employment between people with disabilities and those without. Among working-age people, 21 percent of people with disabilities said they were employed full or part time, whereas, 59 percent of people without disabilities reported they were employed. MSNBC added that 73 percent cited their disability as the reason for unemployment and 37 percent reported they were unable to get the necessary accommodations on the job in order to work with their disability. Furthermore, discrimination charges hit a record high in 2009 with 21,451 claims, up from 17,000 ten years ago. "There have been great improvements because of the ADA, but discrimination in the workplace is still at an unacceptable level," said Rodger DeRose, CEO of the Kessler Foundation.

MSNBC also noted that, according to the Bureau of Labor Statistics, the national unemployment rate for disabled workers in 2009 was 14.5 percent. The unemployment rate among non-disabled individuals was nine percent. Andrew Imparato, president and CEO of the American Association of People with Disabilities, argued that people with disabilities often need government assistance such as Medicaid and Social Security Disability benefits and a lot of employers cannot accommodate those needs. "We need flexibility in benefits and flexibility in the workplace," he said.

President Obama is trying to address the employment disadvantages that many disabled people still face. CNN reported that Obama signed an executive order on Monday, in honor of the ADA, to increase government employment of disabled people. The executive order calls for a number of guidelines, including mandatory training, to increase federal hiring of people with disabilities.

Elizabeth Pendo, professor at St. Louis University School of Law, told The Christian Science Monitor that technology will also play a key role in expanding opportunities for people with disabilities. "The promise of technology is exciting because it harbingers what ADA has strived for since the beginning," she said.