Adecco Staffing Lists The Best US Cities For Job Seekers 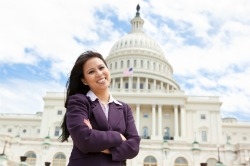 A press release reports that as the U.S. economy continues to improve and companies begin to invest more in staffing, demand for skilled workers is increasing. According to a new report published by the human resources firm Adecco Staffing, however, some cities are faring better than others.

According to Forbes, Adecco used Department of Labor data and internal data relating to job growth and demand to determine which U.S. cities are the best for finding a job. Low unemployment was an important factor, but only one: The rankings also considered the diversity of each city's industries, cost of living and residents' educational attainment.

The top location for job seekers, according to Adecco's algorithm, is the Washington D.C./Arlington-Alexandria, Va. metropolitan area where, Forbes reports, the unemployment level dropped by 0.3 percent between March 2011 and March 2012, a sign that an already strong market is improving. Additionally, as of March 2012, the area's unemployment rate of 5.5 percent was lower than the national average.

"Washington, D.C. and Arlington both have a large population of degreed individuals which matches the skill sets that are seeing the most demand right now; business and professional services, engineering and healthcare," Adecco Staffing Senior Vice President Bob Kovalsky told Forbes. "Additionally, the proximity to Washington, D.C. means a large number of organizations have local ties or offices in the area, regardless of industry."

The complete list of the best U.S. cities for job seekers, as reported in the press release, are below:

"These cities represent places with some of the best job opportunities in the country right now," said Adecco Staffing US Senior Vice President Janette Marx in the press release. "The variety of industries hiring and skills in demand show that there are plenty of reasons to be optimistic about the job climate right now -- and it's something we hope will only get better."

Still, where you live remains just one part of the equation. Experience and education matter, too.

"From a national perspective, those Americans with a college degree that are looking for work are at a higher advantage, particularly in the sectors we're seeing demand in," said Marx to Forbes.

Young, college-educated workers may have an advantage in the current job climate, but that does not mean they are in it for the long haul, especially if they do not enjoy their jobs. According The Press-Enterprise, another Adecco survey found that an estimated 91 percent of four-year degree holders between the ages of 22 and 26 said they would leave their jobs within a year if they were not happy. In fact, just 3 percent said they expect to stay with their current employer for more than 5 years. So what are they looking for? Good health benefits, job security and room for advancement. A healthy salary ranked fifth.