Adolescents Do Not Get Enough Physical Activity In School 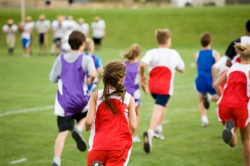 According to a press release, California law requires that middle and high school students receive 400 minutes of physical education every 10 days; yet, the study, which was released by the UCLA Center of Health Policy Research, showed that some 1.3 million teens--roughly 38 percent of all middle and high school students enrolled in California public schools--do not participate in physical education. Furthermore, the report found that as students got older, they participated in physical education even less, from 95 percent at age 12 down to 23 percent at age 17.

California Watch reported that the findings are based interviews with more than 50,000 households, including more than 3,600 adolescents from every county in the state, for the 2007 California Health Interview Survey.

While one of the study's co-authors Allison L. Diamant was alarmed by the fact that California teens do not exercise enough, she noted that the findings are particularly harmful for older teens that are entering adulthood.

"The danger I see is especially among juniors and seniors in high school," said Diamant. "It's at that point in time that they're really setting down behaviors that will continue into adulthood."

According to the press release, the authors attributed the low participation rates to cuts in PE programs. California Watch also pointed out that the average time that teens participated in PE each week varied by county as school districts often had differing policies and resources.

"In difficult financial times, these are decisions that are being made both at the state and local level that are counter-intuitive," said Kevin Gordon, a public schools Lobbyist to ABC7. "They don't make sense. But when you don't have money, people start doing things that don't make sense."

Researchers also noted that exemptions for students in grades 10 through 12 also contributed to the declining participation as students got older.

Also alarming, the press release noted that researchers found that more than 80 percent of all teens do not meet the current recommendations for physical activity. Past research has shown that a lack of physical activity is associated with obesity and diabetes as well as other chronic conditions.

Boys participated in PE more than girls did--66 percent versus 59 percent. However, just 25 percent of boys and 13 percent of girls meet federal recommendations for physical activity.

The authors of the policy stated that more needs to be done to ensure that schools meet statewide physical education standards. Dr. Robert K. Ross, M.D., president and CEO of the California Endowment, which funded the study, agreed.

"Our educators need to understand that physical education is just as essential to a student's academic success as reading, writing and arithmetic," said Ross.

"More than one-third of California teens do not participate in school physical education," healthpolicy.ucla.edu, May 31, 2011