Adult Bullying Alive and Well in the Workplace 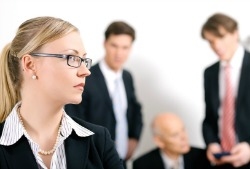 Bullying doesn't necessarily stop after high school even though we so desperately wish it did. In fact, a growing body of research indicates that adult bullying is actually on the rise. According to USA Today, workplace bullying has seen a concerning increase in America. Some of the most obvious consequences of such bullying come in the form of employee dissatisfaction. Targets of workplace bullying may feel increasingly stressed and unhappy. And, unhappy workers could easily lead to a work environment burdened with decreased productivity and a lack of cooperation. As if that wasn't enough, bullied employees often feel like they have nowhere to turn and may hesitate to report the issue for fear of being bullied even more. Furthermore, bullied employees can actually develop serious health issues such as anxiety and depression.

But, why the sudden surge in workplace bullying? According to recent research reported in Psychology Today, the recent economic downturn and its consequences could be causing already stressed-out bosses to lose their cool. Likewise, employees overwhelmed with increased workloads and responsibilities may be less patient with their coworkers as well. Regardless, workplace bullies often get away with the behavior and are even rewarded for it. And, despite the fact that many states have been lobbying the government to pass the "Healthy Workplace Bill" to address the situation, there isn't currently a specific law protecting adult bullying victims.

Until a law is passed to prevent workplace bullying from happening in the first place, victims and potential victims have no choice but to take matters into their own hands. And unfortunately, workplace bullying can take place in many forms, some much less obvious than others.

"Undermining, unfortunately, has become a blood sport cause people are so fearful of their job and status, she said. "So they will target often good people to do their job, to do other things," said Jill Brooke, adult bullying expert and author of "The Need to Say No," to CBS New York. According to Brooke, passive aggressive workplace bullies can be dealt with gently by setting boundaries and sticking to them. "Learning to say no to the daily avalanche of requests enables you to have more time to devote to study and practice, the raw materials of achievement," said Brooke. "It also gives you more time to focus on the causes and people you care about."

Workers who are confronted with more aggressive bullying are advised to document the situation and keep detailed notes of each occurrence. That way, a case can be built against the aggressor if and when managers or superiors become involved in the dispute. Workplaces should also step up their efforts in terms of prevention. Some potential steps include training managers to spot and investigate workplace bullying, giving employees resources to access if and when bullying takes place, and properly disciplining workplace bullies to ensure that the behavior doesn't persist.