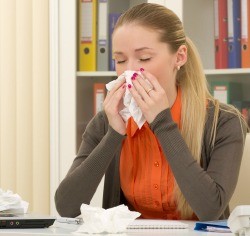 Feminist author Gloria Steinem is continuing to push for women's progress in New York City by backing a bill that would require companies with five or more employees to provide five days of paid sick leave per year.

"I've seen women lose their jobs, lose their apartments, and spend two years getting their kids back from foster care -- all starting with a sick child," Steinem wrote in an e-mail that was quoted by The New York Times.

A letter that urged City Counsel Speaker Christine Quinn to bring the bill to vote was signed by approximately 200 other women of influence, including Steinem. Others included actress Cynthia Nixon and two former Manhattan borough presidents. Steinem and others argue that the bill would greatly benefit women and minorities, who comprise much of low-income workers and often take on more childcare responsibilities, reports Bloomgberg Businessweek.

Others cities, such as San Francisco, Seattle and Washington D.C., have enacted legislation requiring that employees receive paid sick time. San Francisco became the first U.S. city to do so in 2006, according to Bloomberg Businessweek.

The bill, however, has not been supported by Quinn.

"I believe providing paid sick leave to hardworking families is a worthy and admirable goal, one I would like to make available at this time," Quinn said in a statement that was quoted by the New York Daily News. "However, with the current state of the economy and so many businesses struggling to stay alive, I do not believe it would be wise to implement this policy, in this way, at this time."

New York City Mayor Michael Bloomberg is also said to support her stance, as is the 5 Boro Chamber of Commerce Coalition, according to the New York Daily News. The Coalition indicated that such a step would result in job cuts, reduced hours, lower wages and provide a competitive edge to surrounding counties and other areas.

Fears could be based on a 2010 study by the Partnership for New York City that showed that providing paid sick leave to employees could cost companies some $800 million annually, notes Bloomberg Businessweek. However, a forthcoming report from the Institute for Women's Policy Research is expected to show otherwise: while $283 million could be lost by businesses in terms of productivity, $287 million could be gained from a reduction in employee turnover. Additionally, an estimated $41 million annually could be saved because of a reduction in emergency care and decreased virus outbreaks.

"Sometimes leaders have to do things that may be unpopular," he said in Bloomberg Businessweek. "The example right here in New York City is when the mayor years ago said we're not going to let people smoke in bars and restaurants. There was a big cry from restaurants and bar owners that this would force them out of business."

Now, he noted, business owners couldn't be happier with the change.