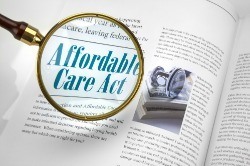 A new report by S&P Capital IQ released Thursday made several predictions surrounding the state of employer-sponsored health insurance over the coming decades. The report comes after the implementation of the Patient Protection and Affordable Care Act late last year, and the influx of new health insurance plans now available to consumers on state exchanges or the federal health insurance marketplace. The S&P report suggests that many large employers will phase out employer-provided health insurance in favor of encouraging their employees to purchase their own plans on an exchange.

According to The Hill, changes to employer-provided health insurance may begin in phases, starting with large companies transitioning their low-income employees to the exchanges, since they are most likely to qualify for a subsidy. However, once companies begin to realize just how much they can save, it might prove irresistible to transition all employees away from employer-sponsored coverage and toward the exchanges. According to the new report, doing so might save large companies as much as $700 billion dollars through the year 2025.

"Neither lawmakers nor the White House originally anticipated the idea that the ACA could provide corporations with an enormous subsidy to earnings," wrote the authors of the report. "However, once a few notable companies start to depart from their traditional approach to health care benefits, it's likely that a substantial number of firms could quickly follow suit."

Even though transitioning employees to the exchanges might become an attractive option for employers, The New York Times expects some companies to continue to offer health insurance benefits regardless of the potential savings. That's partly because offering health insurance to employees still has certain tax advantages for employers, and because the PPACA includes a $2,000 per employee annual penalty for businesses with over 50 employees who choose not to offer coverage. Still, some businesses may still come out ahead if they choose to pay the fine, according to Michael G. Thompson, managing director at S&P Capital IQ.

"We still expect some companies to hold on to their health care plans, just as some private companies still have pensions," Mr. Thompson told The New York Times. "But we think that the tax incentives for employer-driven insurance are not enough to offset the incentives for companies to transition people over to exchanges and have them be more autonomous around management of their own health care."

While workers tend to resist changes to their benefits, Yahoo Finance noted a few ways this move could benefit employees in the long run. First, workers who purchase plans through an exchange would no longer have to change plans when switching jobs. Second, since the rising cost of health insurance has been eating up a larger percentage of employee wages for the last few decades, making health insurance independent of employment might allow employees to ask for higher wages and actually get them.

"Thanks to Obamacare, more companies are likely to dump health benefits," finance.yahoo.com, May 1, 2014, Rick Newman, https://finance.yahoo.com/blogs/the-exchange/even-bigger-obamacare-changes-are-on-the-way-145758836.html