After The Storm: East Coast Colleges Cope With Aftermath Of Hurricane Irene 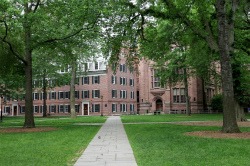 The start of the academic year at many East Coast colleges and universities was postponed as Hurricane Irene--later downgraded to a tropical storm--made its way up the Eastern Seaboard this weekend. In the week before the storm, millions of people were evacuated and cities prepared for the worst. After enduring hours of relentless rain and winds, school officials are now returning to survey the damage.

According to International Business Times, Irene wreaked havoc on many universities, but to the relief of many, its effects were not as dire as expected. Still, as The Chronicle of Higher Education reported, no one regretted having prepared for the worst.

Most campuses experienced fallen branches and uprooted trees, water damage and power outages. At East Carolina University, in Greenville, N.C., director of public affairs Mary Schulken described the damage as "more than superficial, but not catastrophic." Insider Higher Ed reported that the university will reopen on Tuesday, primarily because of flooding in surrounding areas and downed power lines, which would make it unsafe for employees and students who need to travel to campus.

According to The Chronicle of Higher Education, Old Dominion University, in Norfolk, Va., had hoped to let students move into residence halls on Tuesday so that classes could start on Wednesday, but the university is still experiencing telephone and power outages. As of Sunday night, many universities were experiencing similar issues.

International Business Times reported that both Columbia University and New York University postponed their freshman move-in dates. NYU posted a notice on its website reassuring students that they would not be penalized for not getting to campus on time.

"Relax--we look forward to seeing you and will be prepared to welcome you whenever you get here," the notice read.

Yale University, on the other hand, resumed business as usual on Monday, despite downed trees and power lines. Many orientation events, however, were postponed.

Connecticut College, in New London, was more severely hit and as a result postponed move-in and classes for four days.

Although most schools postponed dates to ensure that students did not get stuck in the storm, Harvard University did the opposite--the university had students move-in earlier so that they could be on campus before Irene hit.

Despite the seriousness of Irene, some students still found ways to have fun, noted Inside Higher Ed. One student from Old Dominion was recorded skimboarding across the soggy grass.