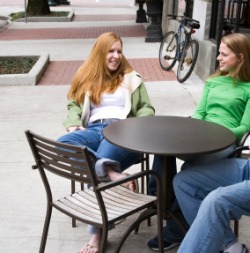 When it comes to choosing a college, academics are not necessarily the only factor potential students consider -- or even, it seems, the most important: Business Insider notes that for some students, location matters just as much, if not more. Thanks to a new report by the American Institute of Economic Research, choosing the ideal school may have gotten a whole lot easier.

The American Institute of Economic Research recently released its latest College Destination Index, which ranks college towns based on a number of criteria, including academic environment, quality of life and professional opportunity. Specific factors included unemployment rates, student diversity and even leisure activities, among others. Researchers pulled data from the Census Bureau, Bureau of Labor Statistics, Department of Housing and Urban Development and other such organizations to determine the top 75 college towns or metros, then separated them by population size. According to the report, the CDI aims to provide students and their families with objective analyses of college locations, especially with respect to the opportunities they provide beyond graduation.

"In today's economic climate, simply attending a great university isn't enough," Steven Cunningham, Chief Economist at AIER, said in a press release published on PRWeb. "The city or town the university is located in can have as much an effect on a student's experience and future prospects. With the economic recovery taking root, more businesses are opening throughout places we studied and that leads to greater opportunity for students, both now and in the future."

Which areas fared the best? While the results suggest strong contenders exist all across the nation, coastal regions fare particularly well. According to the report, the top major metros are the New York City, Boston and Washington DC regions, and the best mid-sized metros are San Jose, Calif., Austin and Pittsburgh. Boulder, Colo.; Ann Arbor, Mich.; and Madison, Wis. topped the small metro rankings. The top college towns -- defined as those having fewer than 250 thousand residents -- were Ithaca, N.Y.; Ames, Iowa; and State College, Penn.

Cunningham suggests that though these regions are particularly good for college students, they have something to offer everyone else, too.

"Cities and towns on this list don't just offer a great academic environment or college experience for students," said Cunningham, who noted that this year's list shows that many areas are bouncing back from the recession stronger than others. "They're also vibrant places for businesses to open, tourists to visit and people to live. These rankings are just as important for a city as they are for the universities based there."

The full CDI ranking is available on the AIER's official website.