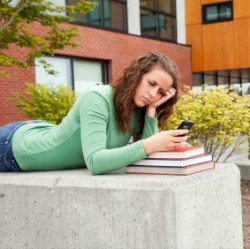 Facebook has nearly one billion users worldwide. Users can see what others are up to, stay in touch and/or post information. Many log onto it every day, and some seem to be much more drawn to it than others. Is there an explanation? A new study revealed, among college students, a link between Facebook engagement and levels of both anxiety and alcohol intake, the MU News Bureau reported. Russell Clayton, now a doctoral student at the University of Missouri's School of Journalism, published these findings from his master's thesis in the Journal of Computers in Human Behavior.

Clayton, under the tutelage of Randall Osborne, Brian Miller and Crystal Oberle of Texas State University, asked 225 first-year students to rate their levels of loneliness, anxiousness, alcohol ingestion and marijuana use along with their degree of Facebook involvement and connectedness to friends on the site, redOrbit explained. On average, study participants had anywhere from 301 to 400 Facebook friends and spent one hour per day on the site.

The survey revealed students with greater anxiety and greater alcohol use were more emotionally connected with the social network, according to the MU News Bureau. Those same students also employed Facebook to interact with others. Students who reported higher levels of loneliness lacked an emotional connection with Facebook but used it to communicate with other users.

"People who perceive themselves to be anxious are more likely to want to meet and connect with people online, as opposed to a more social, public setting," Clayton said. "Also, when people who are emotionally connected to Facebook view pictures and statuses of their Facebook friends using alcohol, they are more motivated to engage in similar online behaviors in order to fit in socially."

Clayton posited because alcohol use is socially acceptable among college students, increased ingestion may result in a heightened emotional connectedness to Facebook, PsychCentral indicated. The study showed a contrary outcome for students with higher marijuana use, as it was not a predictor of Facebook involvement.

"Marijuana use is less normative, meaning fewer people post on Facebook about using it," Clayton said. "In turn, people who engage in marijuana use are less likely to be emotionally attached to Facebook."

According to The Huffington Post, previous studies related to Facebook and users' mindsets have been done as well. One conducted in 2010 showed heavy Facebook users were likely to be more self-centered than others. Researchers in 2012 discovered that for some people, social networking itself was a cause of anxiety.