Along with Increase in Office Holiday Parties, Concerns for How to Conduct Oneself at the Party Rise 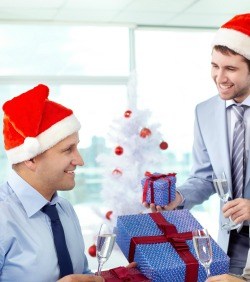 Thanks to the economic downturn, businesses have been cautious about spending money on annual holiday parties over the past few years. However, according to a recent survey, an improving economy has resulted in an increase in companies hosting a holiday party this year.

According to a press release, outplacement consulting firm Challenger, Gray & Christmas surveyed 100 human resources professionals and found that 83 percent reported that their companies are indeed having a holiday party this year -- up from 68 percent last year. Furthermore, 10.3 percent said that their companies were having a party after at least a year of not having one due to the downturn, and 17 percent cited spending more money on it than was spent last year.

Rick Cobb, executive vice president of Challenger, Gray & Christmas, said that despite a lower-than-hoped employment increase, company profits have gone up. The holiday party is a way to reward employees for turning a profit despite having limited resources. Another benefit of the holiday party, as Cobb explained, is that it can boost employee morale at a fairly low cost. "For smaller companies, the holiday party is simply an extension of a more family-like relationship that often exists between these employers and their employees."

Robert Hosking, executive director at Robert Half International's OfficeTeam division, echoed Cobb's opinions in NBC News, stating that "there appears to be a move from the more traditional night out, with dinner and a dance band," to more modest gatherings, such as potlucks and volunteering at a food bank.

While the holidays and the return of office parties are definitely causes for celebration, employees should still be mindful of how they conduct themselves at the annual holiday party as it could make or break their career. In NBC News, business etiquette expert Barbara Pachter advised workers to consider the party as an opportunity to network and connect with senior-level coworkers who could help their career. Glassdoor added that attendees should think of conversation starters and research the people with whom they want to network. As Patricia Rossi, a business etiquette coach, emphasized, the holiday party is "an opportunity to build your brand and build your worth inside the company."

The opportunity to network, however, is not the only guideline to consider in terms of surviving the annual holiday party. For attire, Dan Andrews, Human Resources Manager for Allison+Partners, recommended dressing on the more conservative side and dressing appropriately according to the event venue. For example, a bar party would call for more casual attire, while a country club event would warrant dressing up. For conversation, Pachter recommended in NBC News that employees focus on non-work talking points, such as holiday vacation plans, and establishing a common bond with coworkers. She also recommends avoiding coworker gossip and conversations on sex, politics, and religion.

Another important guideline to follow is limiting one's amount of alcohol consumption. A recent survey conducted by Caron Treatment Centers, a nonprofit provider of drug and alcohol addiction treatment, revealed that 64 percent of Americans have called in sick or know someone who missed a day of work because of a post-holiday party hangover. Half of those who did go to work the next day were also hungover, leading to a potential decrease in productivity. However, that's not the only consequence of excessive holiday party drinking. Employees should also be wary of actions such as aggressive behavior, driving under the influence, or sharing inappropriate details about oneself -- all common behaviors at office holiday parties, according to survey results.

Still, despite the cautionary advice, most experts agree that it is important to actually attend the event. "Not showing up," as Bullhorn marketing manager Vinda Rao explained in Glassdoor, "unless you have a legitimate excuse, makes you look like you don't care."

"Hungover at Work During the Holiday Season?" caron.org, November 27, 2012

Career and Education News
Home >
News>
Along with Increase in Office Holiday Parties, Concerns for How to Conduct Oneself at the Party Rise