Amazon Restricts Students From Taking Some Textbook Rentals to Other States 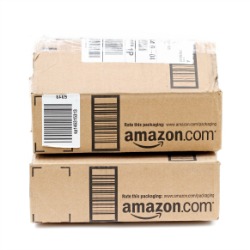 If you are a college student who rented textbooks through Amazon's Warehouse Deals, you could be charged if you take the books to another state.

Warehouse Deals, an Amazon subsidiary, offers deals on returned, warehouse-damaged, used or refurbished products that do not meet Amazon's quality standards. According to Inside Higher Ed, books that are rented through this service are prohibited from crossing state borders, as detailed in the Textbook Rental Terms and Conditions. Amazon began renting textbooks through Warehouse Deals just this summer, but has been renting books through third-party sellers for a while. Interestingly, the restriction only applies to books rented through Warehouse Deals.

If a student violates the rental terms and conditions, he or she is charged the buyout price of the book which can be costly, noted Inside Higher Ed. For instance, if a student rented a sixth edition chemistry textbook by John E. McMurry and Robert Fray and shipped it to Pennsylvania, that student would pay $54.58 before shipping and handling. If said student took the book out of Pennsylvania and Amazon found out, he or she would be charged an additional $96, the difference between the rental cost and the book's buyout price of $150.49.

The policy seems nearly impossible to enforce. However, Richard Hershman, vice president of government relations at the National Association of College Stores, explained in Inside Higher Ed that if a student rents a textbook and ships it to his or her home state, but later mails it back to Amazon from a different state where he or she attends school, Amazon would know the student violated its rental terms and conditions. It would be pretty safe to assume this could happen as most of us typically do not read through all the terms and conditions of our transactions. Furthermore, Inside Higher Ed noted that, depending on the textbook, Warehouse Deals may only ship to select states, so it would make sense that some students would need to take the books elsewhere.

GigaOM noted that while the policy sounds silly, it seems to be a direct effort by Amazon to avoid paying state sales tax. Inside Higher Ed reported that the company's customer service representatives said they did not know why the policy was put into effect and public relations representatives did not respond to requests for comments. Still, Amazon has had a long -- and public -- history of opposing sales tax collection across the U.S. Kenneth C. Green, founding director of the Campus Computing Project, speculated that the restriction is a strategic move to minimize Amazon's presence in other states where it is trying to avoid state and local sales tax collection.

"Presumably the concern is that if Amazon owns rented textbooks that cross state lines, state authorities could argue that Amazon has an official business presence in the state -- a business presence that would require Amazon to collect and to pay state sales taxes," explained Green in an e-mail to Inside Higher Ed.

The policy appears to be problematic as college students could potentially get caught up in higher costs, the opposite intent if he or she is renting a textbook. Furthermore, Hershman pointed out that tax rules are complicated and are often difficult to apply to modern textbook rental programs.

"It makes no sense for state and local governments to tax learning and contribute to increased college costs that they claim at the same time they want schools to reduce," said Hershman in Inside Higher Ed.

Hershman added that it is important that students be mindful of the fine print and understand all the terms and conditions before renting a textbook from any seller.

"Can you take your textbook across state lines? Maybe not if you rent through Amazon," gigaom.com, August 16, 2013, Ki Mae Heussner