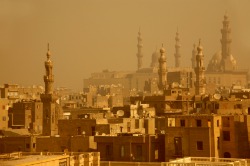 With outbreaks of violence spreading throughout Egypt due to political unrest, American institutions with students in the country have begun making arrangements for evacuation. However, airlines are observing a 4 p.m.-to-8 a.m. curfew imposed by the Egyptian government, leaving thousands of people trying to leave stranded at the international airport, The Chronicle of Higher Education reported.

The US State Department has issued a travel warning cautioning Americans to not travel to Egypt and recommending that those already in Egypt stay indoors during curfew hours, avoid protests and look to leave the country as safely as possible. In addition, the US government has arranged charter flights to help Americans evacuate.

Morgan Roth, communications director for North America for the American University in Cairo (AUC), where about 500 American students are attending programs, said she and her colleagues have been reaching out to parents and study-abroad advisers, who have expressed concern about the welfare of their children and students.

"We are making sure they're all informed and that everybody has the right information," Roth said. "Parents are seeing a lot of terrible things on TV, and want assurance that we are able to provide for their children and are keeping them safe."

Rehab Saad, the university's director of news and information in Cairo, said the Egyptian government's cancellation of Internet access has made it challenging to maintain open lines of communication.

"Once Internet is back up, we will be able to coordinate with our students better," said Saad. "It's very hard right now. It's very hard to communicate with each other."

According to Inside Higher Ed, some parents believe the staff at local universities did an exceptional job communicating with families given the circumstances.

"We know they provided security when students were bused to the dorms on the first day, and they have kept strong security around the dorms in town, as well as working closely with locals from various countries including the USA, to follow proper procedures," said James Holt, whose daughter, a James Madison University student, is staying in the Zamalek dorms at AUC.

Despite requests by the US government and university officials to abide by curfews, some students are deliberately ignoring their advice and attending protests, The Washington Post noted. Cory Ellis, a first-year student in the Middle East studies graduate program at George Washington University, said he watched the riots camera in hand, but was temporarily incapacitated by tear gas.