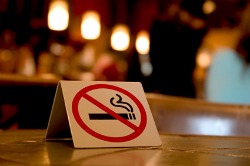 Colleges and universities across the nation are implementing smoking bans on campuses, continuing a trend that began about five years ago and that has gathered momentum in recent months.

The City University of New York, the largest urban higher-education system in the country, recently approved a smoking ban on all 23 of its campuses, The New York Times noted. According to the American Nonsmokers' Rights Foundation, a nonprofit advocacy group, at least 466 colleges have voted to forbid smoking on campus.

Supporters of the bans and public experts say prohibiting smoking is an important step in ensuring that college students, who are known for their unhealthy habits, lead healthier lives.

"It makes a lot of sense," said Cynthia Hallett, executive director of the nonsmokers' foundation, which is based in Berkeley. "My daughter is going off to college this year, and the campus is a student's new home and work and play environment."

CUNY officials estimate that 13 percent of their students, faculty and staff smoke cigarettes. The campuses will have until September 2012 to enforce the new rules, giving them ample time to implement educational campaigns, post no-smoking signs and train counselors to help smokers quit.

"The more you can remove cues in the environment that are associated with that addiction, the less craving the smoker will feel," said Alexandra W. Logue, CUNY's executive vice chancellor and university provost.

Some college students have reacted strongly to the newly imposed rules, calling them unnecessary and restrictive. Dan Cardillo, a sophomore at CUNY, criticized the new rule, even though he does not smoke himself.

"I think it's a stupid thing to do," Cardillo said. "It's a college campus. We should be treated like adults. If it's not illegal, they should not ban it here."

On the other hand, CUNY senior Jennifer Santiago, who smokes half a pack of cigarettes a day, supported the ban.

"I kind of agree with it even though I'm a smoker--for the sake of other people not breathing secondhand smoke," she said. "People got used to the idea by not smoking in bars."

Though some universities forbid smoking in all campus areas, other colleges designate specific places for cigarette smokers. At the University of Michigan, where smoking was previously prohibited only in buildings and dorms, it will be illegal to smoke on most university grounds, The Detroit News reported. Designated places people can smoke include cars, streets and the sidewalks along roadways, even though they are still considered part of campus.

Towson University pushed smokers out of campus buildings into outdoor areas, then ruled that they must smoke 30 feet away from buildings and finally prohibited it altogether, The Washington Post noted. Now, they must step off school property to smoke if they wish to avoid a $75 fine.

"On campus, it's a breath of fresh air--finally," said Steven Crudele, a former member of the student government who was part of the campus smoke-free task force. "When you are walking in and out of buildings, you don't have to walk through a cloud of smoke."