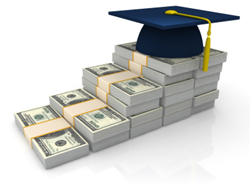 According to an analysis by the American Institutes for Research (AIR), between 2003 and 2008 more than $9 billion was spent by state and federal governments on college students who left school before their sophomore year.

The study, which was based on 2003-2008 data from the federal Integrated Postsecondary Education Data Systems (IPEDS), found that 30 percent of first-year college students who did not return to their original institution for a second year accounted for $6.2 billion in state appropriations for colleges and universities and more than $1.4 billion in student grants from the states. Furthermore, federal government spent $1.5 billion in grants for these students. "These costs can be heartbreaking for students and their families, but the financial costs to states are enormous," said Dr. Mark Schneider, an AIR vice president and former commissioner of the federal National Center for Education Statistics, in a press release.

Thirteen states lost more than $200 million in state funds to students who dropped out of college before their second year. California ranked the highest with a loss of $467 million, followed by Texas and New York losing $441 million and $403 million, respectively. Data did not include community colleges, where first-year dropout rates are much higher. Nor did it take into account students who dropped out after their second year. The Chronicle of Higher Education also pointed out that the study did not include part-time students, transfer students or dropouts who later return to finish their degrees. According to the press release, only 60 percent of students graduate from four-year colleges and universities within six years.

The report states, "The nation will have a difficult time reaching the Administration's policy goals if we continue to spend so much money on students who don't even finish the first lap, let alone fail to cross the finish line."

According to the Los Angeles Times, some feel the study has raised some important policy issues. "The fact that we have these numbers helps with accountability and transparency," said Jack O'Connell, California Superintendent of Public Instruction.

Others, however, have criticized the report for drawing incomplete conclusions, reported Inside Higher Ed. Clifford Adelman, a research associate at the Institute for Higher Education Policy and a former colleague of Schneider's at the U.S. Education Department argued that Schneider's data was too narrow and, thus, inaccurate. "You get only first-time, full-time students who enrolled in the fall semester (not winter or spring) who showed up at the same school (not somewhere else) as full-time students (not part-time) in the next fall semester (not winter or spring). This data story, already distant from the realities of student attendance patterns by three galaxies, is further compounded by a state level analysis which pretends that students never, never cross state lines to attend a second school," said Adelman.

Despite the criticism, Schneider told the Los Angeles Times, "In the K-12 world, we are saying schools are responsible for the success of students. In higher education, we haven't done that yet and we need to."