American Public Values But Still Has Reservations About Online Education 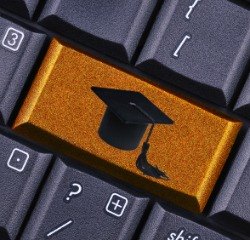 Higher education has had a bit of a publicity problem as of late, reports 24/7 Wall St. A four-year degree can already be an expensive investment, and tuition increases have left the most recent generation of college graduates the most indebted in history. Then, to make matters worse, a difficult job market has left many of those graduates un- or underemployed. In the wake of these headlines lays a trend toward the expansion of online education, which some experts believe can help make college more affordable and accessible. A new study suggests the public agrees -- to an extent.

A recent Gallup survey indicates that most Americans now believe online instruction is at as good as traditional education in a number of areas. Among them: value, the ability to provide a format encouraging success, options, and the potential for individually-tailored instruction. This is not to say Americans do not still have their reservations where online learning is concerned. According to the results, the public still questions the rigor of online education's testing and grading, and worry employers will not regard online degrees as highly as traditional credentials.

Gallup researchers conclude that while online education is in relatively "nascent stages of development and acceptance," Americans are beginning to see the benefits of its lower cost and diverse coursework. If colleges want online courses to be on equal footing with traditional courses, however, they should do more to highlight stricter standards for online instruction, testing and grading. Once that is established, employer perception of online degrees will likely improve.

Inside Higher Ed reports that the Gallup survey conducted this month included more than a thousand respondents ages 18 and older. In addition to gauging public perception of online education, the survey tracked the method's growing popularity: Five percent of all survey respondents and one-fifth of students now say they are taking at least one online course, though it is unclear whether these are for formal education, career training or personal enrichment.

Of course, how one feels about online education -- and higher education in general -- varies from one person to the next. Young people are more likely to enroll in an online course than older Americans, for instance. Opinion on how and what students should study, online or otherwise, also varies: Republicans and people with undergraduate degrees or less believe job-specific training is more important for young people than earning college degrees from well respected institutions; Democrats and highly educated Americans believe educational attainment and institutional reputation matter more.