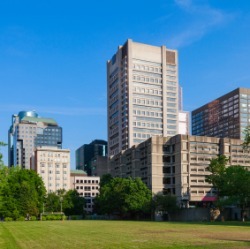 With increasing tuition costs and the specter of student loan debt, some American students are opting to attend a Canadian college where tuition can be much lower due to ample governmental funding, NBC News reported. In the last decade, the number of U.S. students at Canadian colleges grew 50 percent, according to the Institute for College Access & Success. Today, about 10,000 Americans attend Canadian colleges.

The Institute of Education Services pointed out students at Canadian colleges pay an average of about $5,000 in tuition fees per undergraduate year versus $32,000 at a private American school, RT indicated. Graduates from American schools typically owe more than $26,000 after completing college, ICAS noted. On top of that, about 9 percent default on their loans within two years. Further, hundreds of thousands are stuck in minimum-wage paying jobs following graduation. An additional benefit for Americans considering a Canadian college is the fact that they can use college savings plans, apply for scholarships at many Canadian schools, and even use U.S. student loans, NBC News explained.

Maine college student, Eric Andreasen, decided to attend McGill in Canada instead of George Washington in D.C. because of its lower tuition. He could obtain four years of college at McGill, dubbed "the Harvard of the North," for the cost of one year at GWU. The school is also listed 18th on U.S. News & World Report's listing of the world's 400 top universities, according to RT.

"When the financial packages came in, it was a no-brainer for me," he said.

Upon graduation from McGill this spring, Andreasen, a political science major, plans to look for legislative work in Washington, D.C.

"I'm coming out with minimal debt," he said. "It brightens up the prospect of the future for me."

American students say the application process to Canadian universities is simpler than that in the U.S., Daily Mail noted. School admissions officials focus more, and sometimes solely as in the case of McGill, on grades and SAT scores than on essays, letters of recommendation and interviews.

"Undergraduate students that complete in Canada have tremendous access to the best graduate programs right around the world," he said. "So, if you're a student that wants to pursue graduate studies, a Canadian degree will serve you very well, indeed. They also are a passport to good jobs."