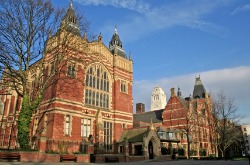 As college tuition continues to rise in the U.S., more American students are looking to the United Kingdom to pursue their higher education.

The population of American undergraduates at U.K. schools has skyrocketed over the past five years, increasing by nearly 30 percent, according to a figure pulled from Britain's Higher Education Statistics Agency and cited in The Washington Post. British higher education officials say that the bulk of American expatriates come from the New York-Washington region and California.

"I think universities internationally are trying to compete for American students in a way that they never have before," said Jim Jump, former president of the National Association for College Admission Counseling and guidance director at St. Christopher's School in Richmond, Virginia.

This fall, Jump's school hosted recruiters from the University of St. Andrews in Scotland, viewed by many admissions officials and high school counselors as an academically reputable and financially affordable option. U.K. universities routinely send recruiters to American high schools, and online admissions have only bolstered the success of those efforts. In addition, social networking has created a digital space for students overseas to share their experiences with friends and family back home.

Mary Catherine Scarborough, a higher education adviser at the British Council, said applications to U.K. universities rose by 17 percent in 2010, attributing the sudden spike to advances in social media that have gained popularity in recent years.

"I think with Facebook, Twitter, e-mail contact, pictures online, I think that's why this is picking up finally," she said. "Think about it: If it's a six-hour plane ride to the U.K., that's the same as if I attended UCLA."

Compared to the U.S., universities in the U.K. pose less of a financial burden to students and their families, even when taking into account the cost of travel, The Wall Street Journal reported. Tuition fees in the U.K. vary by institution and by region, but some of the most notable universities are significantly cheaper than their American counterparts.

For instance, the cost of an overseas undergraduate education at St. Andrews is about $19,000. Studying at the world renown University of Oxford would total just over $20,000. By comparison, every college that features in the top 20 of the U.S. News & World Report's most recent ranking of the best American colleges would cost at least $34,000 a year. Most of those schools cost even more, with fees totaling closer to $40,000 a year.

"[Cost] is a significant reason," Gayle Cook, senior communications manager at St. Andrews, told CNBC. "In terms of total cost--even including flights--we are very competitive with a lot of the privates."