American Workers Are Stressed Out! 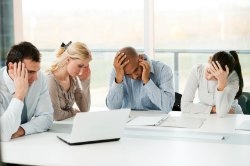 It may come as no surprise that nearly three-fourths, or 73 percent, of employees are stressed out at work, but the most significant reason isn't due to high work load or lack of time for lunch or breaks -- it's due to low paychecks.

"[A] moderately improving economic landscape and lower unemployment numbers have not yet eased anxiety in the workplace and Americans are still, more than ever, concerned about their job situation," John Swartz, regional director of career services at Everest College, said to CNBC.

A low paycheck was not the only stressor, though. According to CNBC, other factors included annoying co-workers (10 percent), commuting (9 percent), having too much work (9 percent), and being employed in a job that is not a top choice (8 percent). Inadequate work-life balance, little opportunity for advancement, and -- perhaps somewhat unsurprising -- the boss also made the list.

Swartz notes that employees should take the empowering steps they need to try and improve their careers.

"Americans are more focused than ever on taking charge of their career and not taking their jobs for granted," Swartz said in the press release. "To reduce job stress, the most critical component is working in a career of your own choosing. If you're frustrated about your career and want to improve your situation long-term, make a plan for success."

Tesla Martinez, president of consulting firm Terra Nova Insights, points out that talking about being stressed is not necessarily favorable and just might leave you -- and others -- feeling more stressed out.

"Stressing that you're stressed will only leave you that way," Martinez said in CNBC. "Folks bum-rush their colleagues with naysaying or unload all their challenges versus taking a step back and realizing the grass isn't always greener. This can drain positive energy levels from their peers and drive colleagues a little loopy!"

One interesting result of the survey was that the number of employees who expressed fear of being laid off or fired as a top stressor dropped from 9 percent last year to 4 percent this year. Additionally, the study also showed that slightly more than a quarter of survey respondents indicated they had no stress on the job at all. Thirty seven percent of these people had household incomes of more than $100,000.

"Money Is The Top Cause of Stress At Work," businessnewsdaily.com, August 16, 2012, Chad Brooks

"Three-Quarters of Americans Stressed by Something At Work," newsroom.cci.edu, August 15, 2012