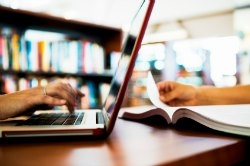 A new survey released by Northeastern University showed Americans have mixed feelings about the quality of higher education in the U.S. The survey, entitled "Innovation in Higher Education," featured questions about cost for value, global competitiveness and the importance of a college education.

In all, 51 percent of respondents ranked the quality of education in the U.S. as "excellent" or "good," while 46 percent rated it as "fair" or "poor," reported the Northeastern News. Findings were based on telephone interview and online survey responses from more than 1,000 American adults in mid-October.

Though many were proud of U.S. colleges, most also felt there was room for improvement in some areas: 60 percent rated the value-to-money spent for higher education as "fair" or "poor." About 83 percent said U.S. higher education needs to innovate in order to stay competitive with other countries. That view was even more pronounced among those under 30 -- 90 percent of respondents ages 18 to 30 said the country's higher education system needed to change, according to the Northeastern News.

"…These findings are a wake-up call for those of us in higher education to renew the social compact we have always had with Americans by innovating across multiple dimensions," said Joseph E. Aoun, president of Northeastern University, in the Northeastern News.

Although Americans are looking for more innovation in higher education, slightly more than half do not think online education is a good alternative, reported HechingerEd. More than two-thirds, however, believe that employers will recognize online degrees as equal to degrees earned at tradition schools in the next five to seven years.

Survey results also revealed concerns about higher tuition rates and even college access, according to The Chronicle of Higher Education. For example, 86 percent of respondents identified paying for college as a significant obstacle to degree attainment.

Yet, the results were not entirely negative. According to the survey, 75 percent of respondents said U.S. colleges and research universities were ahead of those in emerging countries such as China, India and Brazil and even of mature economies such as that in Japan. Another 77 percent indicated that U.S. schools attract the "best and brightest" students from around the world. Finally, 86 percent of respondents credited the U.S. higher education system with helping to develop future leaders.

"Americans Are Proud of U.S. Colleges but Not of Their Direction," chronicle.com, November 27, 2012, Alina Mogilyanskaya