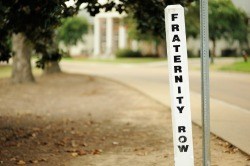 In a move controversial with many of its students, Amherst College recently announced its intention to ban all fraternities and sororities from existing on-campus or off. According to Boston.com, this announcement comes after a recommendation from the school's Sexual Misconduct Oversight Committee to examine the activities of the school's underground fraternities in an effort to address accusations of sexual assault. The committee itself was formed in October 2012 after several reports of sexual assault, followed by allegations that Amherst had not responded appropriately.

Amherst's Sexual Misconduct Oversight Committee did not blame fraternities outright for the reported problems, instead stating their intention to "identify structures and patterns of collective behavior that facilitate sexual misconduct and discourage reporting." And since underground fraternities and sororities might influence students and school culture in ways that would be inappropriate, their "juridical invisibility prevents college officials from enforcing appropriate expectations for student behavior with respect to them, including accountability under the honor code."

This means that Amherst students will no longer be able to participate in any fraternity-like or sorority-like organization or any activities related to "relating to rushing, pledging, initiating or otherwise admitting to or maintaining membership by any student of the College in any fraternity, sorority or other social club, society or organization (however denominated)," Cullen Murphy, Board of Trustees chair, stated in an email quoted by The Huffington Post and sent to students.

Amherst officials plan to take the ban seriously. The email added that "violations of this decision will be treated consistent with other violations of the Honor Code, which sets forth standards and expectations that apply to all students, faculty and staff."

Not everyone is happy with the ban. Fourth-year Amherst student Jasjaap Sidhu told Inside Higher Ed that protests and sit-ins at the university president's office and at the main administration building are currently in the works, mainly due to claims that the decision to ban off-campus fraternities and sororities was made without much input from other parties.

"Fraternities aren't a bastion of white privilege like they would be at other schools," said Sidhu. "A force driving the resolution was that perception, that fraternities have served as that bastion explicitly."

Only about 90 students - or 10 percent of the school's male undergraduate population - are believed to belong to an underground fraternity at Amherst. And since the school began enrolling women shortly before the 1984 decision to ban on-campus fraternities, no known sororities currently exist.

In response to individuals questioning the original 1894 ban, the school's board of trustees wrote that the decision "…was sound and that the reasoning remains valid: The college is better off without, than it would be with, a fraternity system."

School officials believe that even that small group of students can negatively influence the social scene, and the underground nature of the fraternities has the potential to become a liability. The hope is that once underground fraternities cease to exist, the school can take on a greater role in facilitating positive relationships between students and in campus life in general.