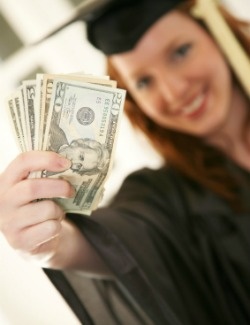 Students looking to receive a bang for their buck might find the deal offered through Antioch College in Yellow Springs, Ohio intriguing.

School officials recently announced that students who enroll over the next three years will have their college tuition waived for the length of an entire education, according to Yahoo's Financially Fit. The total cost savings over a four-year education (based on a current-year price of $26,500) is $106,000.

"We don't want economics to be an impediment to a high-quality liberal arts education," Antioch President Mark Roosevelt said in an Antioch College press release. "By providing four year full-tuition scholarships, we make attending Antioch College a realistic option for the best and brightest students, regardless of their family's economic situation."

Although the school press release talks about an increase in the school's endowment fund as a driving cause for the offer, there is also more behind the story.

The Huffington Post noted that the school suspended operations in 2008 due to decreasing enrollment (starting in 2004), a small endowment and less-than-astute financial decisions.

The school reopened in the fall of 2011 with 35 students, according to Financially Fit. The school is now looking to increase its enrollment numbers and hopes to attract between 65 and 75 freshman for Fall 2012, according to The Huffington Post. The idea is to have an overall attendance of 300 students by 2015.

"We are a 160-year-old start-up institution with a lot of history," Cezar Mesquita, the school's dean of admission and financial aid, said in Financially Fit.

The school is offering about a dozen areas of concentration such as environmental and health sciences, languages, and the social sciences, according to UPI. Additionally, the school had been known for its work cooperative program in the past, a tradition expected to continue; it looks to offer students work engagement opportunities through local, national and international experiences, reported Financially Fit.

Those who want to take advantage of the waived-tuition offer have little time on their hands as far as Fall 2012 enrollment: the deadline for applying is February 15.

The offer is said to be attracting interest. Over the weekend, the school website became unavailable because of increased traffic following the announcement of full-service tuition fellowships, UPI noted. However, the tuition waiver does not cover the cost of room and board, pointed out The Huffington Post. That is estimated at around $8,600 per year.