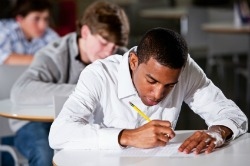 Advanced Placement test fees are going up this spring for low-income students, and some say that fewer students will take the exams as a result.

As The New York Times reported, the federal government recently cut financing for advanced high school courses in its fiscal year 2012 Appropriations bill, from $43 million to about $27 million. Only about $20 million of that will be used to subsidize exam fees for low-income students. As a result, such students will have to pay $15 per test for the first three exams they take, and $53 for any tests after that.

AP exams cost $87 each without the subsidy, and those who perform well on the exams often receive college credit.

Trevor Packer, the official in charge of the AP program at the College Board, told the Times that because of the increased fees, he expects 29,000 fewer students to take the exams this year than originally expected. He added that in all likelihood, fewer low-income students will take multiple exams as well, resulting in a decline of about 47,000 tests.

Packer related to the Times that at a Congressional briefing where the cuts were announced, "it just happened that an AP teacher had brought some students from the Baltimore City schools, all African-American, all-low income. When they heard about the cuts, they went crazy, saying, 'My family's not planning on coming up with extra money for me to take the exams.'"

Packer, however, conveyed a far more optimistic message to state departments of education about the changes in subsidies. In a recent memo announcing the fee changes, he noted that several states already require students to pay a portion of their AP exam fees, and such an expectation is not necessarily a bad thing.

"The requirement of a nominal student contribution does not appear to have negatively impacted students' decision to take an AP exam in these states; in fact, exam participation has grown steadily," he wrote. "AP coordinators report that having these students contribute towards their exams has been a positive factor rather than a hardship. These students frequently recognize that for a small investment in high school, thousands of tuition dollars can be saved in college."

Similarly, Sally Vaughn, Michigan state deputy superintendent and chief academic officer, had a positive spin on the cuts. "Given the current budget climate," she wrote in a memo to school districts, "this is a comparatively positive outcome that attests to the value of the federal AP funding in boosting low-income students' college readiness and reducing their college costs."