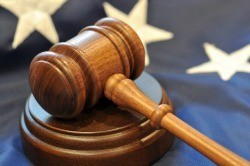 The Affordable Care Act, popularly referred to as Obamacare, is no stranger to controversy. In addition to concerns regarding its effect on employer-provided care, the legislation has faced legal challenges. Some provisions -- including a mandate for contraceptive coverage and the constitutionality of the law itself -- have made it all the way to the Supreme Court. Yesterday, two federal courts issued contradictory rulings on yet another provision of the legislation. The battling opinions will likely take months and another Supreme Court decision to sort through, but according to TIME, the consequences of the ruling could pose what the publication called "the most significant threat to Obamacare" since the challenge to its constitutionality in 2012.

A panel in the D.C. Circuit Court of Appeals ruled yesterday that the ACA does not allow the government to distribute insurance subsidies through a federal exchange in states that declined to establish their own health insurance exchanges -- 36 in total. These subsidies are key because they make insurance affordable to those who otherwise could not purchase the now mandatory coverage. Not long after the ruling was announced, a second ruling came -- this time from the Fourth U.S. Circuit Court of Appeals -- that determined that ACA language on the subsidies was ambiguous, and could therefore be read in different ways. In this interpretation, the subsidies stand.

TIME reported that the battle is far from over: The White House has already said it will challenge the D.C. appeals court ruling, and the challenger will likely to do the same with the Fourth Circuit decision. If the ruling is upheld, however, it could impact more than 7 million Americans and destabilize premiums for everyone else. Administration officials quickly challenged the D.C. ruling and promised that, for now, exchanges will proceed as normal.

"We believe that this decision is incorrect, inconsistent with congressional intent, different from previous rulings, and at odds with the goal of the law," Justice Department spokeswoman Emily Pierce said, as reported by MSNBC. "In the meantime, to be clear, people getting premium tax credits should know that nothing has changed, tax credits remain available."

The Obama administration has a number of legal options to pursue, reported The Wall Street Journal, but said it will first ask the D.C. appeals court to rehear the case with all active judges participating in review. The judges that issued the majority decision were appointed by Republican presidents; the dissenting judge -- who said the ruling "portends disastrous consequences" -- was appointed by a Democrat. The full appeals court is much less conservative, as the majority of judges were appointed by Democratic presidents.