Apple E-Textbook Initiative Off To A Good Start 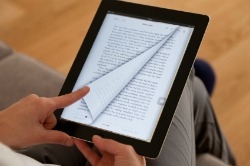 Showing that Apple is geared for success despite the recent death of Founder Steve Jobs, the company was said to have sold 350,000 textbook downloads within three days of the recent launch of its new version of iBooks.

This follows the announcement of Apple's E-Textbook initiative, which was annouced last Thursday at New York City's Guggenheim Museum, Mercury News reported. However, the sales numbers were announced this morning by Global Equities Research.

"[This is] a recipe for Apple's success in the textbook industry," Global Equities Research Analyst Trip Chowdhry told AllThingsD.

Although Mercury News noted that the recent initiative is Apple's first significant since Job's death in October 2011, Education Week pointed out that Jobs had outlined some details for making electronic textbooks available in the recently-released biography by Walter Isaacson.

One asset to the new launch is that electronic textbooks for high schools students can now be found for less than $15 due to a partnership with three major textbook publishers: Houghton Mifflin Harcourt, McGraw-Hill and Pearson, as well as children's book publisher DK Publishing.

According to Mercury News, Apple's initiative includes three apps: a new version of iBooks, which allows students to access e-textbooks on their mobile device; iBook Author, which allows users to publish their own books with the use of Apple tools; and iTunes U, which is an app that allows students and teachers to interact with one another as well as share educational materials such as reading lists and video lectures.

Apple's latest plan could be good news for schools making more use of iPads, according to Wired. A recent report based on a pilot study between Apple and Houghton Mifflin Harcourt showed 20 percent more students scored 'proficient' or 'advanced' in Algebra I material when using iPad tablets than not. The results of the study, done at a Riverside, CA middle school, suggests that iPads allow students to connect better with content.

One reason for this is that iPads might appear less daunting than large textbooks, according to Marita Scarfi, CEO of the marketing agency Organic. On an iPad, it is not apparent what size the book is.

"Now you don't know if a book is super huge and formidable," Scarfi was quoted as saying in Wired. "Learning can be done in snackable chunks."