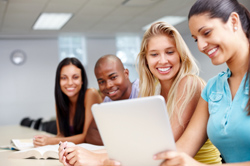 After months of extensive evaluation, the Apple iPad received a passing grade in higher education.

According to a summary report from Reed College, the device had a few issues, but overall passed with flying colors. The school ran the iPad through a gauntlet, testing everything from the device's durability to keyboard functionality to PDF distribution. Reed College, and other schools, ran similar tests on the Kindle DX last year and were much more impressed with the iPad's features.

"The bottom line feeling was that the Amazon Kindle DX was not adequate for use in a higher education setting," said Martin Ringle, chief technology officer at Reed College, to Fast Company. "The bottom line for the iPad was exactly the opposite."

The most impressive feature was one of the simplest ones: a smooth scrolling touch screen. As the reported noted, "The quick response time of the touch screen was highly praised and seemed to be extremely beneficial in class discussions because it allowed students to navigate rapidly between texts to reach specific passages." Students reported that they were able to switch between multiple texts as well as locate and navigate passages with ease. In contrast, students had previously found that the Kindle's joystick navigation could not keep up with class discussions.

The iPad was not without flaws, however. According to Fast Company, students who participated in the study felt the keyboard was somewhat difficult to use and, therefore, was only good for composing short notes. Students also complained about the iPad's lack of a centralized file system, which made it difficult to find documents and occasionally slowed down productivity. Lastly, students also encountered problems loading PDFs onto the device. Annotated versions of PDFs were particularly challenging. In this case, students had two options: emailing the annotated version back to themselves or transferring the document via iTunes, both of which were time-consuming.

While many school officials were excited about the educational possibilities of the iPad when it was initially released, some were worried that it would be too much of a distraction in class. Interestingly, Reed's study found it to be quite the opposite. Students and faculty found that switching applications on the iPad was too slow for recreational purposes during class, which actually made students more attentive. This benefit, however, may be short-lived as the device becomes more sophisticated.

According to Campus Technology, Ringle believes that while many schools have already started handing out iPads to students, this glowing recommendation should put the institutions that were hesitant to embrace the iPad at ease.

"[Reed College is] one of the first tier of technology evaluators in higher education," explained Ringle. "If we adopt it, everyone knows that the equipment or software has been through a rigorous level of scrutiny. If the technology makes it past us, it will generally be welcomed by and applicable for many other schools."