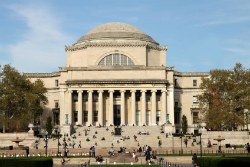 After years of growth, a number of elite colleges are seeing a drop or a slowdown in the number of applications.

As Bloomberg Businessweek reported, there was an 8.9 percent drop in applications to Columbia for a total of 31,818 applications. At the University of Pennsylvania, applications dropped 1.7 percent. Similarly, applications to the Massachusetts Institute of Technology rose just 1 percent, making it the smallest increase in seven years. At Dartmouth College, applications were estimated to have increased by 3.5 percent, compared to 19 percent last year.

Jon Reider, head of college counseling at University High School in San Francisco, pointed out that there is intense competition for slots at such elite colleges. "There are a finite number of teenagers who have the credentials to make themselves competitive for schools like this and, at a certain point, that level is hit," Reider told Bloomberg Businessweek. "The supply of kids flattens out."

Columbia's drop in applications followed last year's record-setting increase of 33.4 percent. That rise was widely attributed to the university's decision to move to the Common Application.

Jessica Marinaccio, the school's dean of undergraduate admissions, noted that applications increased by 21.5 percent overall in the two years since the school switched to the Common App, which is to be expected: Many colleges experience a 10 to 25 percent two-year increase in applications after they move to Common App.

"Our application numbers this year appear to be normalizing to a size consistent with this trend and at a level that continues to indicate strong student interest," she said, in a statement quoted by the Columbia Spectator.

She also added that Harvard and Princeton's decisions to reinstate their early admissions programs very likely contributed to the decrease in applications to Columbia. Eric J. Furda, dean of admissions at the University of Pennsylvania, said in an email to Bloomberg Businessweek that Penn's drop in applications was probably affected by Harvard and Princeton's new early admissions programs as well.

Yet not all selective colleges saw their application numbers fall. According to the Yale Daily News, Yale saw a 5.8 percent increase, or a total of 28,870 applications.

Jeffrey Brenzel, Yale's dean of undergraduate admissions, did not elaborate about why Yale's numbers have gone up. He pointed out that because universities use different strategies for recruitment, the numbers do not tell much.

"Year-to-year fluctuations in total application counts have little meaning in themselves," he told the Yale Daily News.