Applications To Medical School On The Rise 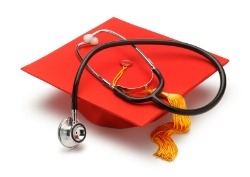 The number of applicants to medical schools has reached an all-time high.

According to data released yesterday by the Association of American Medical Colleges, first-time applicants to medical school increased by 2.6 percent in 2011 over last year to a total of 32,654 students. The total number of applicants rose by 2.8 percent to 43,919 students.

"We are very pleased that medicine continues to be an attractive career choice at a time when our health care system faces many challenges, including a growing need for doctors, coupled with a serious physician shortage in the near future," said Dr. Darrell G. Kirch, AAMC's president and CEO, in a news release.

Enrollment at medical schools rose as well: According to AAMC data, 19,230 students entered medical school in 2011--a three percent increase over the year before.

"This diversity will be important as these new doctors go out into communities across the country to meet the health care needs of all Americans," Kirch said.

He noted that many students opt for a career in medicine because they see such work as being significant. "Today's college undergrads are very service-oriented," Kirch was quoted as saying by the Los Angeles Times. "They are drawn to medicine because they like the notion of meaningful work."

Of course, so many applications for limited spots means that competition for medical school admission is fierce. Chris Nelson, vice president of public affairs for the University of Utah Health Sciences, noted that of the 1,500 applicants to the University of Utah's School of Medicine this year, only 82 students were admitted.

"We have the luck of having a fabulous applicant pool," he told the Deseret News. "It's safe to say that for every open spot, two to three applicants would've been eligible candidates."

Medical schools have increased their enrollment by 16.6 percent since 2002 to help alleviate anticipated physician workforce shortages. But Kirch cautioned that the number of residency training positions at teaching hospitals needs to grow as well.

"We are very concerned that proposals to decrease federal support of graduate medical education will exacerbate the physician shortage, which is expected to reach 90,000 by 2020," he said in the news release.