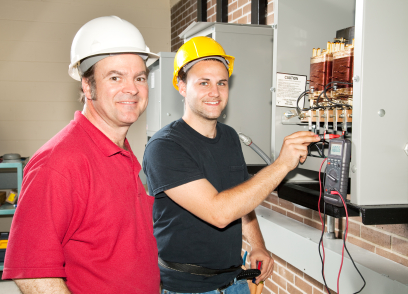 Even though college enrollment is surging across the country, not everyone is jumping on the bandwagon: A growing number of people are opting to instead study trades through apprenticeships.

"A lot of people are bored in high school," noted Robert Lerman, an economics professor who was quoted by Voice of America. "They leave high school because they are bored. They want to do something besides sit in a classroom."

He added that a college education is not necessarily appropriate for everyone. "A large number of young people would learn much better through a combination of work place learning and academic learning but tied to particular objectives," he told Voice of America.

The Washington Post reports on the similar phenomenon of students who have already earned college degrees and then embark on apprenticeships to become plumbers, electricians, auto mechanics or carpenters.

"I have friends my age who are just deciding to go to graduate school," said Adam Osielski, who just completed an apprenticeship program to become an electrician. He told the Post that he chose his blue-collar profession instead of enrolling in law school after graduating college with a degree in theology. "I'm glad to be already working and developing a career," he said.

The Post notes that apprentice programs in the Washington, DC area typically last five years and are seeing a surge in applications. Close to 4,000 people applied for 300 slots at plumbers and pipe fitters school, and an apprenticeship program run by the International Brotherhood of Electrical Workers Local 26 in Lanham, Maryland, attracted 2,500 applicants for 100 slots.

Such trades can earn respectable salaries which are often close to or exceeding those earned by college graduates. In Forbes' list of best-paying blue-collar jobs, elevator installers and repairers rank at the top with an average salary of $67,950, with the top 10 percent earning just under six figures. Forbes notes that according to Robert Caporale, editor of Elevator World magazine, the profession requires an apprenticeship of at least four years.

Other professions on the list that require apprenticeship training or associate degrees from community college include oil and gas rotary drill operators, and petroleum pump operators. Both jobs earn salaries that average in the mid- to upper-fifties.

Those who complete apprenticeships say that work can be found even during a recession. "The good thing with trade is more than likely you're always going to have a job," said Travis Strawderman, who is in an apprentice program run by the Plumbers and Steamfitters Union in the state of Maryland and was interviewed by Voice of America. "And as soon as you get out of the apprenticeship they're going to put you to work."

"US Economists Say University Not Only Way to Success," Voice of America, June 14, 2010, Elizabeth Lee