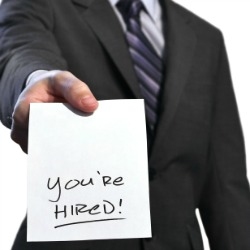 The U.S. economy added an estimated 165,000 jobs in April, easing concerns of an economic slowdown during the spring.

According to CNNMoney, economists had been predicting a spring slowdown similar to that of previous years largely due to cuts in government spending and weaknesses in global markets. Today’s April jobs report was unexpected, yet welcomed.

Meanwhile, the government continued to shrink in April, declining by 11,000 jobs. Construction, which had been a bright spot for economic growth in the first quarter of 2013, lost 6,000 jobs last month. CNNMoney speculated that these cuts were most likely due to decreased government funding for construction projects such as infrastructure and schools.

The Labor Department also revised its job numbers for the prior two months, reported The New York Times. The month of February was revised upwards to 332,000 jobs, while March was bumped up to 138,000 jobs. The revised data showed that an additional 114,000 jobs were generated during those two months than was originally reported.

April’s jobs report also showed that the unemployment rate dropped by 0.1 percentage point to 7.5 percent. The least-educated still suffer from a higher jobless rate--11.6 percent in April--than those with a high school diploma. Conversely, those with a college degree or higher remained at a lower level, despite a tiny increase last month. This group has an unemployment rate of 3.9 percent.

Despite the positive report, some still worry that job creation—and thus the economy—will slow down. As The New York Times pointed out, there are still many who have been unemployed for 27 weeks or more and the longer these individuals are out of work, the harder it will be to find employment as skills start to degrade. Automatic, across-the-board cuts in government spending that went into effect in March are also likely to increase layoffs in the coming months.

“While more work remains to be done, today’s employment report provides further evidence that the U.S. economy is continuing to recover from the worst downturn since the Great Depression,” said Alan Krueger, chairman of the Council of Economic Advisers, in The New York Times. “Now is not the time for Washington to impose self-inflicted wounds on the economy.”

According to CNNMoney, the U.S. economy has added 6.2 million of the 8.7 million jobs lost during the Great Recession. However, if population growth is factored in, Heidi Shierholz, an economist with the Economic Policy Institute, estimated that there is still a gap of some 8.6 million “missing” jobs. At the current pace of growth, it could take at least five years before the job market gets back to pre-recession levels.