Are Meetings Making Us Dumb? 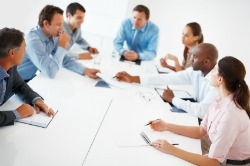 Business meetings are rarely enjoyable. But a recent study shows that that may not be the only reason to cut back on them--they can also make us dumb.

"You may joke about how committee meetings make you feel brain dead, but our findings suggest that they may make you act brain dead as well," Read Montague, the study leader, wrote in a Virginia Tech Carilion statement.

Montague is director of the Human Neuroimaging Laboratory and the Computational Psychiatry Unit at the Virginia Tech Carilion Research Institute. There, Montague and researchers used IQ tests to measure 70 volunteer college students' intelligence before and during group activity and used functional magnetic resonance imaging (fMRI) to observe corresponding changes in the brain, Life Inc. reported. What they found is that small group settings, such as meetings, temporarily lowered students' intelligence.

"We saw dramatic drops in the ability of some study subjects to solve problems, Montague told The Huffington Post. "The social feedback had a significant effect."

During the study, the volunteers were told how well they did on the tests compared to the others. The result, for some, was a drop in IQ scores. Also for that group, as they saw their rankings go down, they answered more questions incorrectly.

The ones who didn't do well likely were more attuned to group social dynamics, worrying about how they did and comparing their performance to others, the researchers postulated.

According to the statement, age and ethnicity had no effect. Gender, however, did. Among male and female participants who had the same baseline IQ, more women than men fell into the low-performing group.

The Wall Street Journal noted that, for some, being in a small group resulted in them contributing nothing or making unintelligent comments. Remaining quiet is more common in women and people with higher IQs, the study showed. Women often are more attentive to what others may be feeling or thinking, which may have an evolutionary origin, Montague said.

What isn't clear, the study noted, is how much the effects of small group social dynamics occur in real world settings. Kenneth Kishida, one of the study's authors, argued that more research was needed.

"...Given the potentially harmful effects of social status assignments and the correlation with specific neural signals, future research should be devoted to what, exactly, society is selecting for in competitive learning and workplace environments," said Kishida in the statement.

"Speaking Up Is Hard to Do: Researchers Explain Why," online.wsj.com, February 7, 2012, Elizabeth Bernstein