Are You a Workaholic? Blame Your Parents 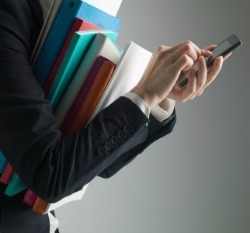 For some people work is just a means to a paycheck, while for others their job is what defines them. What makes people's attitudes towards work so different? That is the question that researchers from the University of Michigan sought to answer.

As reported by The Michigan Daily, Wayne Baker, business professor and chair of management and organizations at the University of Michigan's Ross School of Business, and Kathryn Dekas, a Ross Ph.D. graduate and now people analytics manager at Google, conducted the first empirical study to find out why people viewed work so differently. Baker and Dekas surveyed more than 100 part-time MBA students and found that parents played a major role in determining a person's views on the meaning of work, called "work orientation", according to a University of Michigan news release.

The study builds on previous research by Amy Wrzesniewski, also a University of Michigan alum who is now on the faculty at Yale's School of Management. Wrzesniewski studied work orientations for many years and in her research, found that people fall into one of three categories -- job-oriented, career-oriented or calling-oriented. Job-oriented workers tend to see their job as a source of income and pursue their passions outside of work. They are typically eager to stop working or retire. Career-oriented people are the typical "workaholics". Their identity is based on their job and they perceive work as an opportunity for upward mobility, prestige, social status and achievement. Calling-oriented people see work as a route to personal fulfillment. Their goal is to pursue their passions and they usually want their work to have a positive impact on others.

Interestingly, The Michigan Daily noted that researchers found that participants tended to mimic their father's work orientations more so than their mother's. They speculated that this biased influence might be a result of gender norms during participants' adolescence. Because the average age of the participants was 31, this means that they grew up in the 1980s, when women were underrepresented in the workforce. Additionally, more than half of the participants' working mothers were in fields that are not characterized by career mobility such as health care or education. Baker told The Michigan Daily that he would expect the findings to be much different if the study were repeated in the future.

Although parents were the most major influence, researchers did find that certain outside factors could lessen parents' influence on one's work orientation. Industry hardships, for example, could push workers towards a job- or career-orientation.

"If you are working in a distressed industry, that tends to swamp the effects of parental influence," explained Baker in the news release. "I think it's hard to think about the higher purpose of your work if you are fearful of losing your job."

According to The Michigan Daily, researchers noted that the study's findings highlight the importance of being aware of your own work orientation and finding employment that matches it. Such introspection could help you find a job that is truly fulfilling.

"University alum and professor ask how and why we work," michigandaily.com, November 13, 2013, Rachel Premack, http://www.michigandaily.com/news/research-suggests-link-between-parental-attitudes-work-orientation

Career and Education News
Home >
News>
Are You a Workaholic? Blame Your Parents