Assemblyman Proposes a Fourth California University System With No Courses 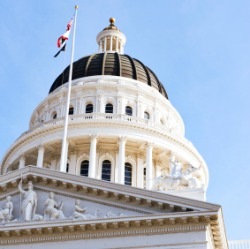 The University of California, California State University and California Community Colleges have long provided public higher education for the state of California. Now a state assemblyman has proposed a fourth system, but with a catch: The new institution would not charge tuition, hire teachers or build classrooms. In fact, it would not offer any classes at all.

Assemblyman Scott Wilk, R-Santa Clarita, has proposed a bill to the California State Assembly that would create a new public higher education system called the New University of California. Unlike at traditional colleges, however, NUC students would earn credit by passing exams rather than by attending classes. Students could learn the necessary skills however they choose including via self-study or through low-to-no-cost massive open online courses called MOOCs.

"It exists for a single purpose: to certify by examination that an individual has acquired the knowledge and skills necessary to compete and succeed in the work force," Assemblyman Wilk said in a statement, as reported by The Daily Californian, UC Berkeley's student-run newspaper. "It has no tuition, no faculty, and no bureaucracy."

According to the proposed bill, NUC students would pay a small examination fee and present an acceptable form of identification before taking an exam. Those who pass would receive academic credit toward a relevant degree. The program could offer students an alternative to the CSU, UC and CCC systems, which, due to budget restraints, have had to increase tuition and scale back course offerings.

"Bills that creative don't always get all the questions answered right off the bat," McGee told KQED. He said one of the primary concerns is accreditation and how it could be achieved by a university that does not have classes and faculty.

Student organizations including the Associated Students of the University of California and the UC Student Association have also expressed reservations regarding the bill.

"Part of my feeling towards this bill is to be cautious about modifying our higher education system in ways that would substantially alter it," ASUC senator Nolan Pack told The Daily Californian. "I think the problem is that, while there may be arguments saying that it is cheaper, it circumvents the problem that we are not currently funding our higher education system to where it should be."

Darius Kemp, UCSA organizing and communications director, agreed, telling The Daily Californian that while the group encourages "discussion towards any improvement to higher education," it also believes it is "important that we fix the broken system we have now."

KQED reports that the Committee on Higher Education's hearings on the bill are slated for April 23.