AT&T and Udacity Team Up to Create Nanodegree 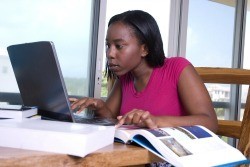 This week, AT&T and online education provider Udacity announced a joint venture aimed at creating a whole new type of college degree -- a "nanodegree." According to The New York Times, nanodegrees, which can be earned in as little as 6 to 12 months online, are a form of focused, vocational training with the potential to prepare students for careers in technology-related industries such as big data or computer programming. This new educational concept is thought to be a winner for students who have found traditional higher education to be out of reach or for those who simply want to focus on a specific skill or career path.

"We are trying to widen the pipeline," Charlene Lake, an AT&T spokeswoman, told The New York Times. "This is designed by business for the specific skills that are needed in business."

As The Wall Street Journal noted, the nanodegree programs currently in the works will focus on entry-level software skills that could help students get their foot in the door. However, AT&T is currently the only company that plans to hire graduates of its nanodegree program. The hope is that, with time, other big technology players might give nanodegree graduates a shot as it gains legitimacy among large employers.

AT&T and Udacity will offer the mini-degree program to students at the cost of about $200 per month. AT&T has promised to offer paid internships to 100 program graduates. According to Udacity, nanodegrees provide an alternative to traditional higher education, as it actually focuses on the exact skills employers seek. And so far, a few big technology players have already come forward in support of the effort.

"We are designing nanodegrees as the most compact and relevant curriculum to qualify you for a job. The sole goal is to help students advance their career: whether it's landing their next job, their next project, or their next promotion," Udacity wrote on their blog. "The initiative is endorsed by companies such as Cloudera, salesforce.com, Autodesk, as well as Technet, Silicon Valley Leadership Group, sf.citi, and the Business Roundtable."

"It's a more focused education with less time wasted," Thrun told The New York Times. "They can get a degree quickly, get a job and then maybe do it again."

"A Smart Way to Skip College in Pursuit of a Job," nytimes.com, June 17, 2014, Eduardo Porter, http://www.nytimes.com/2014/06/18/business/economy/udacity-att-nanodegree-offers-an-entry-level-approach-to-college.html